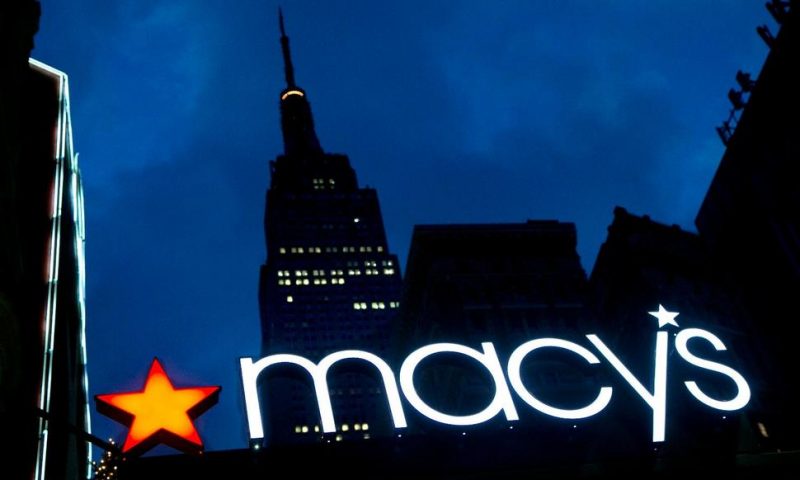 Macy’s weak third-quarter earnings report threw coal on the holiday season and offered the latest sign of challenges for traditional retailers operating at the nation’s malls.

Macy’s on Thursday cut its profit and sales expectations for the year after posting a steeper-than-expected 3.5% drop in sales at stores opened at least a year including business from licensed departments like jewelry. It marked Macy’s first quarterly comparable store sales decline in almost two years.

Macy’s, which also operates Bloomingdale’s, cited the late arrival of colder weather and meager tourist business. But it also blamed a steeper-than-anticipated sales decline in stores at lower-tier malls.

Kohl’s Corp. cut its profit outlook for the year after a disappointing third quarter dragged down by poor women’s clothing sales. It posted an overall anemic 0.4% increase same-store sales. Meanwhile, J.C. Penney has long been struggling and is in the throes of another reinvention. Same-store sales fell 9.3% in the quarter.

Nordstrom, which reported results late Thursday, raised the lower end of its annual earnings forecast, noting that the impact of tariffs on Chinese imports would not be significant. But the divide between its mall-based stores and its Nordstrom Rack stores continued. Its regular Nordstrom department stores saw net sales down 4.1%. while its Nordstrom Rack stores had a 1.2% increase in the quarter. The Gap Inc., which also reported late Thursday and earlier this month fired its CEO, said sales at established stores fell across all its brands. Old Navy fell 4%, Gap fell 7% and Banana Republic dropped 3%. The company said it is still in the midst of separating its low-priced Old Navy brand into its own separate publicly-traded company.

“They’re all dependent on malls, but the problem is a lot of people aren’t going to malls,” said Neil Saunders, managing director at GlobalRetail.

There are other issues at play. Some chains like Gap have been slow to innovate while they face new competition from the likes of off-price chains like T.J. Maxx and discounters such as Target. T.J. Maxx and Target, which operate stores at strip centers, have been upping their game when it comes to affordable fashion assortments.

Target’s clothing sales rose 10% in the latest quarter, helped by its expansion into new fashion brands it created. It also added mannequins to display their merchandise for the first time two years ago. T.J. Maxx parent TJX Cos. reported a better-than-expected consolidated same-store sales increase of 4%.

However, many traditional retailers have been aggressively overhauling their businesses. Kohl’s, for example, is hoping to drive more customer traffic by accepting Amazon returns at all 1,150 stores. Nordstrom has been trying out new formats like service hubs that don’t even sell clothing.

Still, their fate is tethered to the mall.

A report from Credit Suisse published two years ago predicted that up to a quarter of the shopping malls will close by 2022 given the increasing popularity of online shopping and a rash of store closings.

Still, not all malls are struggling. While vacancy rates on average at the nation’s malls are currently at 4%, top malls have been the industry’s bright spot, boasting strong traffic and currently averaging a 2% vacancy rate, says CoStar Group, a real estate research firm. That’s compared with the bottom rung of malls, which are wrestling with a 7% average vacancy rate.

Macy’s has pursued a number of strategies as a way to get shoppers back. That includes recently teaming up with resale site ThredUp. The company’s Bloomingdale’s division just launched a rental service. About 50% of the customers are millennials.

Macy’s has also been upgrading the look of its top 150 stores in healthy malls.

“Where we’re investing and our mall developers are investing, we’re getting great outcomes,” Macy’s CEO Jeff Gennette told analysts during the earnings call. He noted that the 150 stores account for over 50% of its brick and mortar business.

Macy’s has been also been closing stores as part of a restructuring announced in February.

Still, those efforts are not enough as Macy’s latest earnings report indicates.

Revenue declined to $5.17 billion from $5.4 billion, which is short of expectations, according to a survey by Zacks Investment Research.

For the year, Macy’s now foresees adjusted earnings between $2.57 and $2.77 per share. Its previous outlook was for $2.85 to $3.05 per share. For sales, the chain now anticipates a decline; it previously expected sales to be flat.

Analysts polled by FactSet predict full-year earnings of $2.78 per share

Saunders says he thinks Macy’s should focus on improving the look at other stores in other high-performing malls like Fashion Square in Scottsdale, Arizona.

“There are still a lot of good malls out there,” he said. “Macy’s has done nothing.”