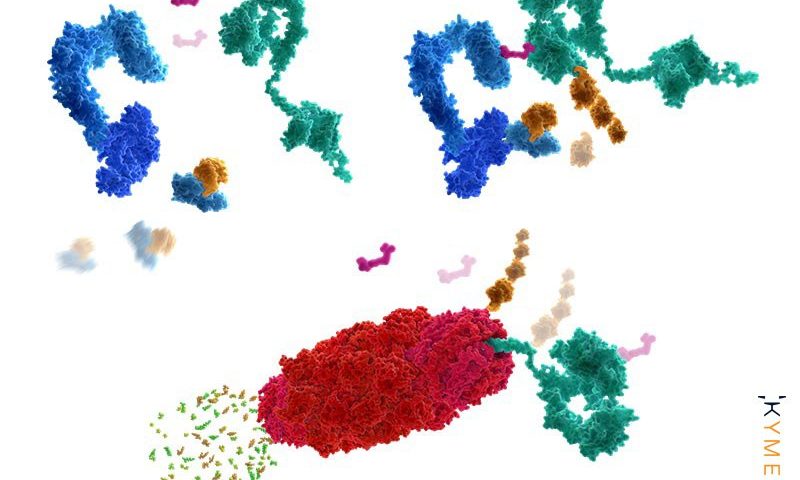 Protein degraders are opening up the possibility of pursuing therapeutic targets that are otherwise considered “undruggable.” Kymera Therapeutics has one such novel compound, with early data showing promising activity in animal models of solid and blood tumors.

While the SITC data are about Kymera’s earlier STAT3 degrader, called KTX-201, the company recently got an FDA go-ahead to move its potential first-in-class STAT3 degrader program, dubbed KT-333, into a phase 1 trial. The company aims to launch the study by the end of 2021, Kymera CEO Nello Mainolfi, Ph.D., told Fierce Biotech Research via email. It would be the first degrader to enter the clinic that targets a previously undrugged transcription factor, Mainolfi noted.

Kymera, a 2019 winner of Fierce Biotech’s Fierce 15, designs heterobifunctional degraders through a drug discovery platform called Pegasus. Such a small molecule binds on one side to the protein of interest—STAT3 in KT-333’s case—and on the other side to an enzyme called E3 ligase, which helps tag unwanted proteins for degradation, Mainolfi explained.

STAT3 is a known target, with well-characterized roles in cancer, inflammatory disease and fibrosis. Abnormal activation of STAT3 has been noticed in various blood and solid tumors, and it also creates a hostile tumor microenvironment to evade being targeted by the immune system.

Treatment with KTX-201 led to significant tumor growth inhibition in mouse models of colorectal cancer and B-cell lymphoma, Kymera reported at SITC 2021. The drug appeared to have remodeled the tumor microenvironment, as researchers also observed a decrease in immune-inhibiting M2 macrophages and a simultaneous increase in proinflammatory M1 macrophages and lymphocytes that entered the tumors.

The team tested KTX-201 alongside an anti-PD-1 inhibitor. In the colorectal cancer model, the combination eradicated tumors in 60% of treated mice. The animals also developed immunological memory, as they could fight off cancer when they were re-challenged, the team reported.

After completing the phase 1a dose-escalation portion of the KT-333 study, “there will be an opportunity to explore select combinations, including with anti-PD-1 agents, in both liquid and solid tumors,” Mainolfi said.

Kymera will present preclinical data on KT-333 at the upcoming American Society of Hematology annual meeting. The drug showed potent and selective degradation of STAT3 in lab dishes of anaplastic T-cell lymphoma cells and successfully killed off cells that are dependent on STAT3 signaling for survival.

STAT3 was historically viewed as an undruggable target, but other companies have recently proposed small molecule inhibitors. MD Anderson Cancer Center spinout Tvardi Therapeutics recently raised a $74 million series B to fund a phase 2 trial of a STAT3 inhibitor in cancer and fibrosis. A few days ago, Recludix Pharma emerged with a $60 million series A and a plan to develop STAT inhibitors to treat cancer and inflammatory diseases.

Comparing the inhibition strategy to the degradation approach, Mainolfi noted that while inhibition can interfere with STAT3 functioning, it is unlikely to fully block STAT3 signaling and transcriptional activity.

“We believe that degradation of this protein will lead to sustained and durable activity in the clinic, whereas inhibition will not fully engage the target,” Mainolfi said, noting that antitumor response data from some other STAT3-targeted agents haven’t been comparable to Kymera’s.

Because STAT3 is involved in multiple pathways in cancer and inflammation, an effective STAT3 degrader will have substantial therapeutic potential, Berenberg analyst Zhiqiang Shu, Ph.D., wrote in an investor’s note last week.