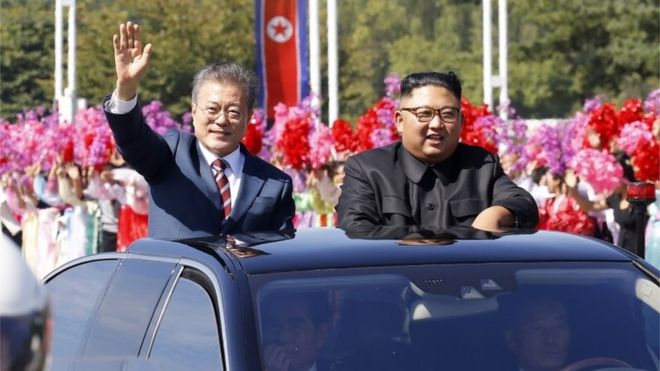 The leaders of North and South Korea are meeting in the North Korean capital for talks centred on the stalled denuclearisation negotiations.

North Korea has embarked on an unprecedented series of meetings this year with both the South and the US.

But talks with Washington have reached deadlock, with both sides so far agreeing only to very general goals.

South Korea’s president hopes to be a mediator between the two, as well as boosting the inter-Korean relationship.

President Moon Jae-in and his wife Kim Jung-sook arrived in Pyongyang on Tuesday morning for the three-day visit.

They were warmly welcomed from the plane by Mr Kim and his wife, Ri Sol-ju.

Tens of thousands of North Koreans waved flowers and shouted unification slogans as the leaders rode in an open car through parts of Pyongyang.

It’s the first trip to the North Korean capital by a leader from the South in a decade.

It is Mr Moon’s third meeting with the North’s Kim Jong-un since their historic summit at the border in April this year.

The Korean War ended in 1953 with an armistice – but no formal peace treaty was signed.

What’s on the agenda?

The two leaders are expected to talk about what practical steps to take to reduce the nuclear threat on the Korean peninsula, but the specifics are not known.

Human rights issues are not on the table.

For South Korea, there are two main goals:

When the two Korean leaders met for the first time back in April, the simple fact that they were meeting was itself a major step. This time, Mr Moon has to make real progress in persuading the North Koreans to make concrete steps to denuclearise, says BBC Seoul correspondent Laura Bicker.

Otherwise, the flurry of inter-Korean summits and the much-hyped Singapore meeting between Mr Kim and President Trump this year will be seen as glossy photo ops, and the US leader may begin to lose patience, she adds.

The April meeting resulted in a joint declaration to improve ties and scale down the nuclear threat.

Since then, North and South Korea have held a reunion of families separated by Korea’s division, and last week set up a liaison office at the border to allow direct communication 24/7.

This week, it’s thought they will look at steps towards further co-operation. Developing the economic relationship is expected to be a key theme, but one concrete outcome could also be a scaling-down of the military presence at their border, the heavily guarded Demilitarised Zone (DMZ).

Who else is going?

In line with the focus on economic ties, executives from South Korea’s big business conglomerates, or chaebols, will form a large part of the South’s delegation.

Economic co-operation between North and South is nothing new. Aside from trade relations, South Korean firms once employed tens of thousands of North Korean workers in a jointly-run industrial park in the town of Kaesong, on the North’s side of the border.

The project ran for more than 10 years but was suspended in 2016 after North Korea carried out its fourth nuclear test.

Seoul is also seeking to deploy its cultural power. K-pop singer Ailee, and Zico, the leader of boy band Block B, are set to perform in Pyongyang.

Will it help the US-North Korea talks?

Given the tight international sanctions on North Korea, any new economic co-operation between North and South will depend on an easing of sanctions on the North. This in turn will depend on the progress Pyongyang and Washington will make in their talks.

The US and North Korea held their own historic meeting in June when US President Donald Trump and North Korea’s Kim Jong-un agreed in broad terms to work towards denuclearisation.

Since then though, there’s been little progress with no clear process or timeline laid out. Most observers warn that the North has taken no meaningful steps to denuclearise.

While the US wants denuclearisation first and an easing of sanctions second, North Korea hopes for a step-by-step process where each concession by Pyongyang will lead to a gradual easing of the sanctions regime.

Given that deadlock, the US last month called off a trip by Secretary of State Mike Pompeo to North Korea, citing a lack of progress.

However, Mr Trump recently said that he and Mr Kim would “prove everyone wrong” after he received an invitation from the North Korean leader for a second summit. Both sides say they are working on making that meeting happen.

In the run-up to Tuesday’s inter-Korean talks, South Korean envoys reported that Mr Kim in fact wants to complete denuclearisation within the first term of the Trump administration.

The India fishermen using cheap smartphones to map the coast