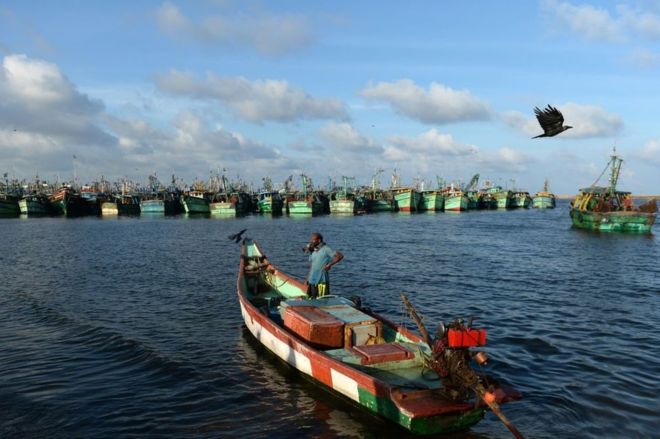 Trapped between rising sea levels and development projects that are eating into the coastline of the southern Indian state of Tamil Nadu, fishing communities using cheap technology have taken matters into their own hands, reports Mahima A Jain.

More than 40 fishing villages around Chennai (formerly Madras) have created land use maps using open source software and affordable technology. A land use map helps identify which areas of land are used for which purpose.

“We are among the first to undertake such a mapping exercise along the coast in India,” said Saravanan, a 35-year-old fisherman, who only uses his first name. He is a coordinator at the Coastal Resource Centre (CRC) in Chennai, which leads the mapping exercise in the region.

He often rides along the length of the northern coast of Tamil Nadu with a borrowed MacBook Pro and a smartphone to map contested and vulnerable areas.

Coastal areas in the region have witnessed a surge in storms, floods and beach erosion in the last decade alone. Devastating floods in Chennai in 2015 were also largely blamed on encroachment of lakes and rivers for building projects, according to a report by a government committee.

The fishermen were spurred to act because, for the last five years, the state government has failed to finalise a coastal zone management plan (CZMP). This is crucial to monitor development projects along the shoreline, protect the livelihoods of fishermen and conserve ecologically sensitive areas.

In recent years – as the CZMP was delayed – several industrial and development projects have sprung up along protected coastal areas in Tamil Nadu.

“So we mapped all our common areas and village boundaries so that the government can’t evict us and private companies can’t encroach on to our land,” said R Suraya, 21, a fisherman in the Koraikuppam village, which is located to the north of Chennai. (Common areas are those used by fishermen for landing boats and drying the day’s catch and fishing nets.)

“Fisherfolk will be the worst affected if common lands such as mangroves, wet lands and beaches are lost,” Mr Saravanan adds.

A one-metre rise in sea levels by 2050 will affect more than a hundred thousand fisherfolk in just three districts of the state including Chennai, according to a 2017 report by the Indo-German Centre for Sustainability.

Many of the villages that have been mapped by CRC are among those likely to be submerged.

The tiny village of Koraikuppam is one of them. The Tamil Nadu government has offered to relocate the villagers. But according to Mr Suraya this plan is not feasible as it would involve villagers moving further inland and a “lot of time and effort would be wasted to reach the sea” every day to fish.

Mr Suraya was appointed by his village to learn to make the land use maps as he is its only resident with an undergraduate degree. Along with Mr Saravanan, he has led the villagers in an exercise to map areas on their phones. Based on these maps and meetings with the village council and local officials, Mr Saravanan has created detailed maps of scale using open source geographic data.

These include land use patterns as well as high tide, low tide and hazard lines, as per official requirements. They are then submitted for official approval. This is an ongoing process – some maps have become a part of the official record, while others are still awaiting approval.

“By doing this exactly the way the government wants, we create scientific proof of what should and should not be there,” explains Mr Saravanan.

This way, he adds, these maps are comparable to those produced by the government or private developers.

“When compared to government maps which lack any data at the village level, you can see that ours are the original maps,” says Duraimahender, who is the chairman of the Tamil Nadu fishermen’s association.

“Now everyone uses a mobile phone. We use GPS even when we are out on the sea. So these maps have become a part of our fight.”

He adds that they also help environmental activism, providing enough information in disputes.

“For the government, the map is some lines. For us, it’s life,” says K Bharathi, head of the south Indian fishermen’s welfare association.

Fishermen in Chennai first mapped land use when the government proposed an expressway in 2010 that would cut across an intertidal zone, affecting 14 villages, including the nesting ground for the endangered Olive Ridley turtles. The project was later dropped amid massive public opposition.

Yet mechanised fisheries, real estate projects and private industry continue to take over common areas along the coast.

In such situations, the maps are a huge help. Recently, they were used by the CRC and villagers to challenge a plan – by the government-owned Kamarajar Port Limited – to convert wetlands and salt marshes into industrial real estate. The maps have also been used in disputes involving city “beautification” plans, road expansions and expressway projects.

Mr Saravanan says most mapping projects kick off only when villagers sense a threat to their land from development projects.

So far, he has held workshops in Gujarat, Goa and West Bengal but no village outside Tamil Nadu has caught the mapping bug yet.