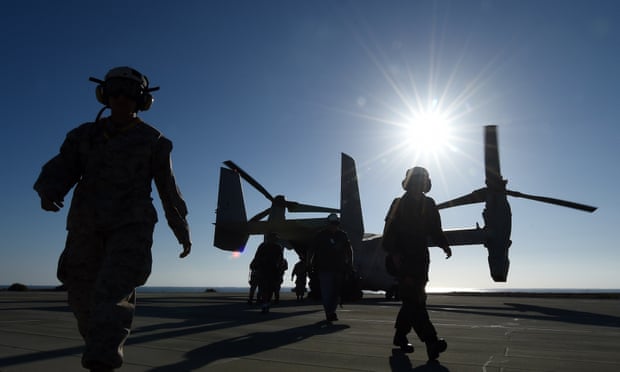 Japan will bolster air and sea defences amid “strong concern” about growing Chinese air and naval activity in the region, according to newly released defence guidelines.

The guidelines, adopted by the cabinet on Tuesday, include plans to adapt two existing helicopter carriers so that they can accommodate fighter jets – effectively turning them into aircraft carriers.

Under the 10-year plan, Japan will improve the defence of its outlying Pacific islands in response to Chinese military expansion, as Tokyo – the US’s key ally in the Asia-Pacific – comes under pressure from the Trump administration to take more responsibility for its own security.

Japan will buy forty-five F-35 stealth fighters in addition to 42 jets that are already on order, according to a separate five-year procurement plan the cabinet approved the same day. It will also acquire two US land-based Aegis missile defence systems, as well as other American missile interceptors.

Overall, Japan will spend a record 27.5 trillion yen ($243 billion) on military equipment over the next five years, an increase of 6.4% from the previous five-year plan.

Spending on defence has risen steadily since Abe took office in late 2012 vowing to expand Japan’s military capabilities and turn it into what he has described as a “normal country”.

“The United States remains the world’s most powerful nation, but national rivalries are surfacing and we recognise the importance of the strategic competition with both China and Russia as they challenge the regional order,” the defence guidelines said, adding that there was “strong concern” over Beijing’s military build-up in regional waters.

“We need to develop truly effective defence abilities, rather than simply expanding traditional ones,” they said.

By modifying its two 248-metre-long helicopter carriers, Japan would in effect be acquiring its first aircraft carriers since the end of world war two – a move critics say violates its postwar constitutional commitment to a purely defensive role for the military.

Previous Japanese governments have ruled out acquiring aircraft carriers, adhering to the postwar consensus that the vessels’ capabilities could be interpreted as offensive. In another controversial move, Japan will acquire cruise missiles designed to hit enemy targets.

Defence officials have attempted to deflect criticism by describing the aircraft carriers as “multifunctional warships” that would only be used to defend the country from an attack.

They have also argued that improving its missile defences is essential to respond to possible threats from North Korea, which has yet to follow up on a commitment to denuclearise.

The plans will take Japan closer to achieving regional power status amid dramatic increases in Chinese military spending, a nuclear-armed North Korea and a resurgent Russia.

Tokyo is particularly concerned about the vulnerability of its islands along the edge of the East China Sea, where the two countries are embroiled in a long-running dispute over the Senkaku islands.

Japan is also wary of China’s rising defence spending and its construction of military facilities in the South China Sea.