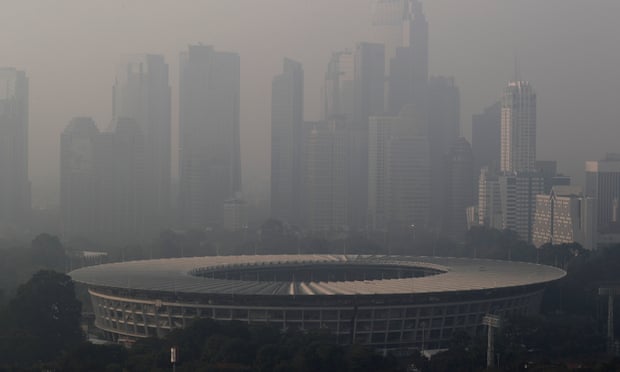 Tired of breathing in some of the world’s filthiest air, a group of activists and environmentalists in Jakarta has decided to sue the Indonesian government to take action.

Air quality in the south-east Asian metropolis has plunged dramatically in the past month and recorded worse conditions than notoriously polluted cities such as Delhi and Beijing.

Social media users have uploaded photographs of the Indonesian capital blanketed in smog under the hashtag, #SetorFotoPolusi.

On 25 June, the capital registered an air quality index (AQI) of 240 according to the dynamic IQAirVisual index. For comparison, London’s current index reading is 12 while San Francisco is on 26.

The Jakarta smog has now prompted more than 30 plaintiffs, including activists, environmentalists, civil servants, artists, and businesspeople to band together and work on submitting a civil lawsuit against the government this month.

The case will be filed against the Indonesian president, as well as the ministries of health, home affairs and environment, and the governors of Jakarta, Banten and West Java.

“We hope that through this lawsuit the government can improve existing policies and take effective steps to overcome air pollution because current policies are not working,” explained Ayu Eza Tiara, a lawyer from the Jakarta Legal Institute, which is handling the case.

“In the last week of June, based on our data, the air pollution index is often really bad,” said Ayu, “It is often high in the red zone, which is classified as very unhealthy.”

According to the dynamic IQAirVisual index, Jakarta topped the charts for the world’s most polluted city at least half a dozen times this June.

The AQI reading is based on measurements of particulate matter, including PM 2.5, small particles less than 2.5 micrometers in diameter that can be inhaled and cause serious health problems.

Last year Jakarta was ranked the most polluted city in south-east Asia, based on a study by Greenpeace and AirVisual, published this March.

But the Indonesian government appears reluctant to acknowledge the problem.

The acting head of the Jakarta environmental agency recently dismissed the poor June readings, saying the government “doesn’t really respond to real-time data” and in general the air quality had been “moderate” this year.

Jakarta governor Anies Baswedan has put the problem down to the high number of vehicles on the road, but Greenpeace energy campaigner Bondan Andriyani argues that is only part of the picture.

“In 2018 the data showed that traffic in Jakarta was improving, but the air quality, declined. It’s a contradiction,” said Bondan, “The PM 2.5 data showed that number of unhealthy days almost doubled in 2018 from the year earlier.”