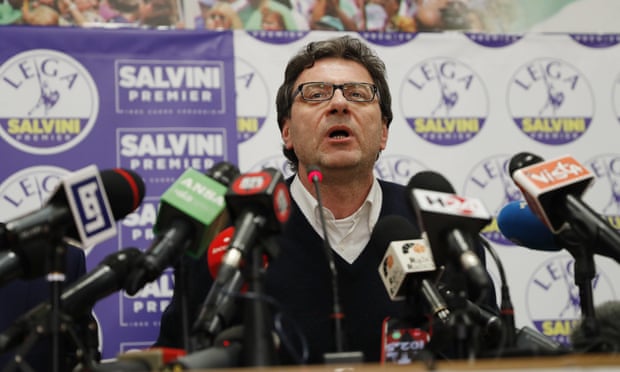 Fears that Italy’s banks face a black hole in their finances are expected to grow this week following a debt downgrade that could send the value of bank reserves plummeting.

Despite efforts to shore up Italian banks’ reserves, a downgrade by the ratings agency Moody’s on Friday following a row between Rome and Brussels over the government’s budget could send them into freefall again.

A senior government official added to the tension on Sunday by issuing a warning that Italy should not ignore the deteriorating financial situation and its effect on the country’s banks, including possible capital needs.

Giancarlo Giorgetti said in a newspaper interview that a fire sale of Italian government bonds over the last five months had put huge pressure on bank reserves and could trigger a second crisis in two years.

The budget plans of Italy‘s populist government, which breach EU borrowing rules, have prompted investors to shed €67bn ($77bn) of Italian government bonds since May. The effect has been to push values down and the interest rate on government bonds, referred to as the yield, to more than three percentage points higher than safer German bonds.

“The increase in the [bond yield] spread, the amount of public debt banks hold and new European Union banking rules put the industry under pressure and may generate the need to recapitalise the most fragile lenders,” said Giorgetti, who is an influential member of the far-right League, one of the two parties in Italy’s ruling coalition.

Italian banks have bought billions of euros of their own government’s bonds in the past 18 months, in apparent contradiction of efforts to stabilise their finances and diversify their reserves into other assets. In response, investors have taken flight from Italian bank shares, which trade at a fraction of the value of their assets.

Without recourse to investors, bank chiefs would be left seeking a further bailout from ministers, but growing uncertainty over Italy’s prospects would make it hard for them to raise capital.

“We can’t just pretend nothing is happening and ignore these problems,” Giorgetti said. The government was made up of “responsible people who would do things responsibly”.

After initially rebuffing criticism from Brussels over a sharp deficit increase in the draft 2019 budget, which the European commission has labelled an unprecedented breach of EU fiscal rules, Italy appears to have softened its stance.

The country’s prime minister, Giuseppe Conte, said on Saturday that Rome wanted to establish a constructive dialogue with the EU over the budget because it recognised the role of European institutions.

The government asked Brussels to sanction a 2.4% annual spending deficit next year that would increase the country’s total debt to GDP level, which is currently the second highest in the EU behind Greece at 131%.

“The 2.4% figure is a ceiling for all the various measures included in the budget, but it’s not a given that all of them can be implemented because there could be technical difficulties,” Giorgetti said.

The coalition made up of the League and the anti-establishment Five Star Movement wants to boost deficit-spending to lower the retirement age and provide a basic income for the poor.

Moody’s said it had downgraded Italy’s rating to BAA3, its lowest investment grade, from BAA2 in response to the high level of debt and lack of GDP growth. It said, however, that the country’s trade surplus and high levels of private savings meant it was unlikely to go bust.