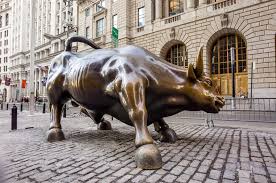 In the weekly newspaper’s biannual Big Money Poll, 56% of professional investors said they are bullish that U.S. stocks will rally through to June 2019, up from 55% in spring. The respondents, who made their predictions before the recent equity market sell-off, estimated that the S&P 500 index will reach $3,078 by the middle of the next year and $3,166 by the end of 2019, representing upside of 11% and 14%, respectively, from Monday’s opening price of $2,768.

This optimism was partly driven by a bullish outlook for the U.S. economy. About 60% of the investors surveyed predicted that U.S. gross domestic product will expand by 3% or more in the next 12 months.

Some of the poll’s respondents expressed their disapproval at President Donald Trump’s negotiation style, although most agreed that he is having a positive impact on corporate America. More than half of those surveyed gave the president’s performance a B grade or better, up about a third from the last survey in spring.

While Trump’s popularity is growing, confidence in corporate earnings appears to be retreating. Fourteen percent said earnings disappointments pose the biggest risk to the market, double the tally of six months ago. Over half of the investors surveyed predicted that profits will rise between 6% and 10% next year, a fairly big drop from the 20% gains that analysts are expecting.

Respondents were particularly bearish about several of the companies and sectors that have been responsible for driving the recent bull market.

Opinions on FAANG stocks, Facebook Inc. (FB), Amazon.com Inc. (AMZN), Apple Inc. (AAPL), Netflix Inc. (NFLX), and Google parent Alphabet Inc. (GOOGL), were generally divided, with one respondent, Robert Medway, a managing partner at Royal Capital Management, claiming that only Amazon remains appealing. “Company by company, except for Amazon, all have issues,” he said. “They won’t grow as fast as they have in the past, and we don’t own the group because of valuation.” Fifty-four percent of respondents were bearish and 46% were bullish on FAANG stocks.

Meanwhile, investors were very bearish about Tesla Inc. (TSLA), marijuana stocks and cryptocurrencies, some of the other highest-trending investments.