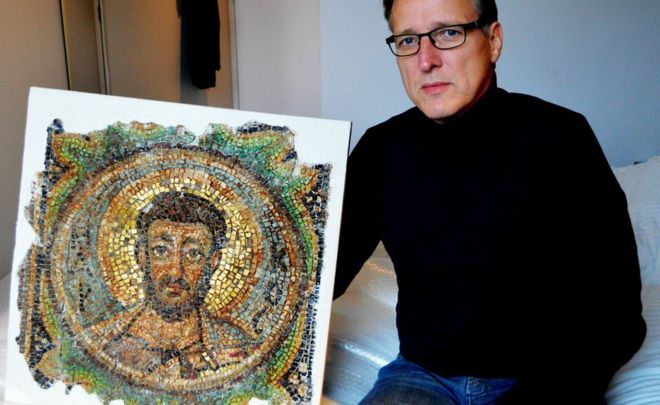 The man nicknamed “the Indiana Jones of the art world” has done it again – this time tracking down a precious sixth-Century mosaic stolen from Cyprus.

He handed the work over to the Cypriot embassy in The Hague on Friday.

Where was the Cypriot mosaic?

The Byzantine depiction of Saint Mark was stolen in the 1970s from Panayia Kanakaria church, about 105km (65 miles) north-east of the Cypriot capital, Nicosia.

Mr Brand spent nearly two years chasing the work across Europe, finally tracking it down in the possession of a British family.

They had “bought the mosaic in good faith more than four decades ago”, the investigator told AFP news agency.

“They were horrified when they found out that it was in fact a priceless art treasure, looted from the Kanakaria church after the Turkish invasion,” Mr Brand said.

“It was one of the greatest moments of my life,” the investigator said.

The newest instalment of the Indiana Jones franchise, which stars Harrison Ford in the title role, is scheduled for release in 2020.

The 2002 Van Gogh museum raid was one of a series of thefts that shocked the art world.

In 2004, two Edvard Munch masterpieces, The Scream and Madonna, were seized by armed men who raided the Munch museum in Oslo. Several men were jailed and the paintings later recovered after painstaking detective work in 2006.

Another version of The Scream was stolen from the National Art Museum in Oslo in 1994 and that too was later recovered in a sting operation by UK detectives.

In 2012, seven artworks were stolen from Rotterdam’s Kunsthal museum, including paintings by Picasso, Monet and Matisse. Two thieves were later jailed, telling a Bucharest court that security at the museum had been lax. Some of the paintings were destroyed in an oven.

Earlier this year, four paintings out of a haul of 24 stolen from a Dutch gallery in 2005 were recovered in Ukraine.