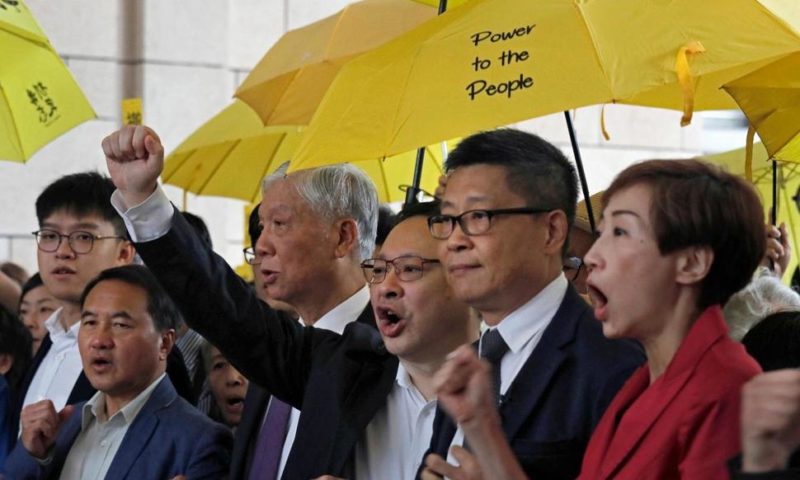 Hong Kong protest leaders who went on trial Monday for spearheading pro-democracy demonstrations in 2014 say their prosecution threatens the future of civil rights in the territory, where fears have grown of Beijing’s growing influence.

HONG KONG — Hong Kong protest leaders who went on trial Monday for spearheading pro-democracy demonstrations in 2014 said their prosecution threatens the future of civil rights in the territory, where fears have grown of Beijing’s growing influence.

“What is on trial is not just the nine of us. What is on trial also is the high degree of autonomy and the rule of law that all Hong Kong people are entitled to,” said defendant and University of Hong Kong law professor Benny Tai at a news conference following the first day of the trial.

Tai, along with another professor and a pastor, were leaders of the “Occupy Central” campaign to press for free elections of Hong Kong’s top leader. They are charged with conspiracy to commit a public disturbance and incitement to commit public nuisance.

Protesters in what was also known as the umbrella movement laid siege to the government headquarters and paralyzed Hong Kong’s financial district for 79 days but failed to win any concessions. Thousands staked out encampments on major thoroughfares. Several hundred were arrested.

The other defendants — two current and one former lawmaker, two student leaders and a political activist — face charges of incitement to commit a public nuisance. Each charge carries a maximum penalty of seven years.

“All of us pleaded not guilty because we believe the charges are unreasonable, unconstitutional and unprecedented,” said Chan Kin-man, a sociology professor who is described by prosecutors as Tai’s co-conspirator.

The defendants pumped their fists in the air and chanted “Shame to political prosecution!” before entering the West Kowloon courthouse. They were joined by more than 100 supporters, some raising the yellow umbrellas that came to represent the movement because demonstrators used them to defend themselves from police attacks.

Three university students prosecuted in 2016 for their leadership roles in the protests received community service. But Hong Kong judges have since faced mounting pressure from Beijing to hand down heavier sentences to deter future protests.

Some in the semi-autonomous Chinese city fear that central government meddling will erode judiciary independence, a bedrock value that undergirds the city’s standing as a global business capital.

The former British colony was handed over to Chinese rule in 1997 under an agreement in which China promised it could retain its own laws, economic system and civil rights for 50 years.

Ranging in age from 30 to 74, the nine defendants span generations of Hong Kong citizens who have been agitating for full democracy. The trial is expected to last 20 days.