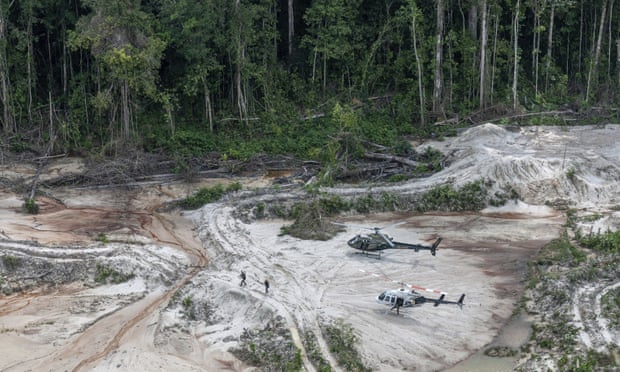 An epidemic of illegal artisanal mining across the Amazon rainforest has been revealed in an unprecedented new map, pinpointing 2,312 sites in 245 areas across six Amazon countries.

Called garimpo in Brazil, artisanal mining for gold and other minerals in Amazon forests and rivers has been a problem for decades and is usually illegal. It is also highly polluting: clearings are cut into forests, mining ponds carved into the earth, and mercury used in extraction is dumped in rivers, poisoning fish stocks and water supplies. But its spread has never been shown before.

“It has a big impact seeing it all together,” said Alicia Rolla, adjunct coordinator at the Amazon Socio-environmental, Geo-referenced Information Project, or RAISG, which produced the map. “This illegal activity causes as many social as environment problems and we hope there can be coordinated actions from the countries impacted to prohibit it.”

Its publication comes weeks before Brazil’s far-right president-elect, Jair Bolsonaro, takes office on 1 January. Last year Bolsonaro said he practisedartisanal gold mining during his holidays in the 1980s and he has won support from garimpeiros (artisanal miners) with promises to help them work with “dignity and security”. He also wants to legalise mining on protected indigenous reserves where it is currently banned.

The map was produced by a network of non-government, environmental groups in six Amazon countries – FAN in Bolivia, Gaia in Colombia, IBC in Peru, Ecociência in Ecuador, Provita and Wataniba in Venezuela, and Imazon and the Instituto Socioambiental in Brazil. It also includes information where available on what was being mined and when, citing sources that vary from government registers to satellite imagery.

In 37 cases, the groups say illegal artisanal mining took place in protected indigenous reserves, 18 of which were in Brazil. Another 78 reserves showed garimpo taking place along their limits and borders – 64 of them in Peru – and 55 nature reserves also had illegal mining.

An accompanying “story map” in English has maps, videos and interviews, detailing cases, such as the Amarakaeri Communal Reserve in Puerto Luz in Peru, where indigenous people said they had been forced into artisanal mining because the devastation it wrought in their region left no other options to survive.

The mercury used in gold extraction is affecting indigenous and local populations who live or work near mine sites, it said. In Venezuela – which has the highest number of mining sites – and Colombia, illegal mining often happens in areas where irregular armed groups operate.

Nilo D’Avila, campaigns director at Greenpeace Brasil, said the map confirmed his own research showing garimpo is increasing in the Amazon.

Carlos Young, a professor of economics at the Federal University of Rio de Janeiro and a specialist in environmental economics connected to illegal deforestation and the trade in drugs and arms, said garimpo camps can bring in alcohol and prostitution, causing negative impacts on forest communities.

“It is also a map of crime, of the drug trade, of prostitution. There are diverse nuances of this crime, of this illegality, that demands integrated governance,” he said. The map also shows how prevalent garimpo is in border regions, he noted, adding that Bolsonaro’s plans to neuter environmental agencies will encourage it more.

“If I want to guarantee national sovereignty I need more inspections and control and not the contrary,” he said.

The map also shows how close many illegal sites are to legal mining concessions. That came as no surprise to Laura Sauls, a PhD candidate at the geography school at Clark University in Massachusetts, and one of a group of international scientists behind another report that showed how legal mining and associated infrastructure works increasingly threaten forest cover and community rights by enabling “population movements and agricultural expansion further into the forest”. In some cases, she said, garimpo comes too. “I would expect there to be illegal mining in areas where there is a large mine,” she said.

Is nuclear disarmament set to self-destruct?