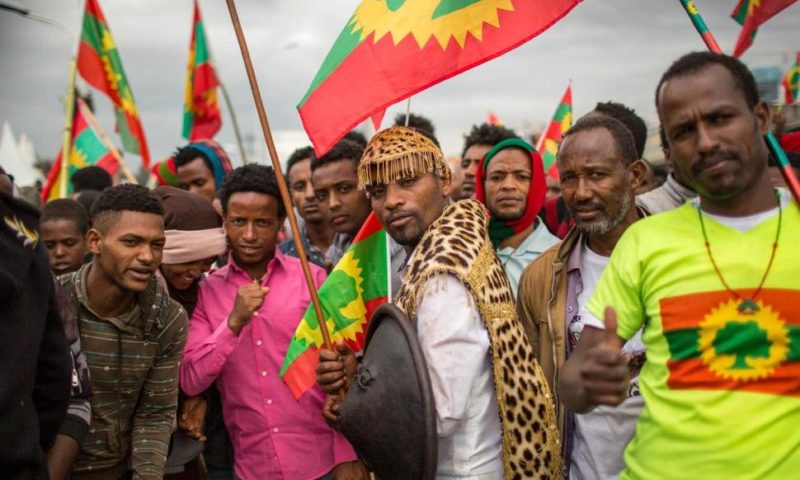 ADDIS ABABA, Ethiopia — Hundreds of thousands of Ethiopians gathered on Saturday to welcome returning leaders of the once-banned Oromo Liberation Front amid sweeping reforms to bring opposition groups back into politics.

The OLF and two other organizations were removed from a list of terror groups earlier this year after Prime Minister Abiy Ahmed took office. He invited them to come home as he vowed to widen the political space in a country where the ruling coalition, in power since 1991, and affiliated parties hold every seat in parliament.

Earlier Saturday, some 1,500 OLF fighters returned to Ethiopia from neighboring Eritrea. The group since the 1970s has advocated the “right to national self-determination” for the Oromo people, Ethiopia’s largest ethnic group.

A large concert was held in Meskel Square in the capital, Addis Ababa, to welcome OLF leader Dawud Ibsa and others arriving from Eritrea’s capital. Events also were held in Oromia, the largest region among Ethiopia’s federal states.

“I’m happy to be here after 26 years of struggle from outside of Ethiopia,” the OLF leader told reporters. “We have been struggling to bring the changes that we are seeing now in Ethiopia. We are now seeing positive signs that include the respect for rule of law. That’s why we came here.”

The prime minister’s chief of staff, Fitsum Arega, warmly welcomed the OLF leaders. “A peaceful contest of ideas will move us from a culture of conflict into a culture of peace,” he said in a Twitter post.

Abiy, the first Oromo politician to become prime minister since the ruling party came to power in 1991, took office after more than two years of deadly anti-government protests in the Oromia and Amhara regions spread throughout the country and led to a state of emergency. Tensions in restive areas have dramatically declined as the new government released several thousand prisoners, unblocked websites and welcomed opposition voices.

“This is a day that we have been longing for,” Milkessa Hunde, a university lecturer, told The Associated Press. “This is why thousands of Qeeros (youths in Oromia) sacrificed their lives. We are eternally indebted to them.”

After clashes in recent days between youth from Oromia and the capital over displays of the OLF flag in Addis Ababa, the prime minister condemned any incitement of violence. He added, however, that “the right of freedom of expression includes the use of a flag of choice.”

Police used tear gas to separate the two sides as some businesses closed.