Safe-haven demand is once again boosting gold prices as U.S. equity markets drop 2% across the board.

“Gold’s safe-haven allure is back,” said Phillip Streible, senior market strategist at RJO Futures. “Equities are doing down sharply and investors don’t know what to do, so they are turning to gold.”

Safe-haven demand pushed gold prices to its highest level in three months. While off its session highs, the gold market is still holding on to modest gains; December gold futures last traded at $1.235.70 an ounce, up 0.91% on the day. 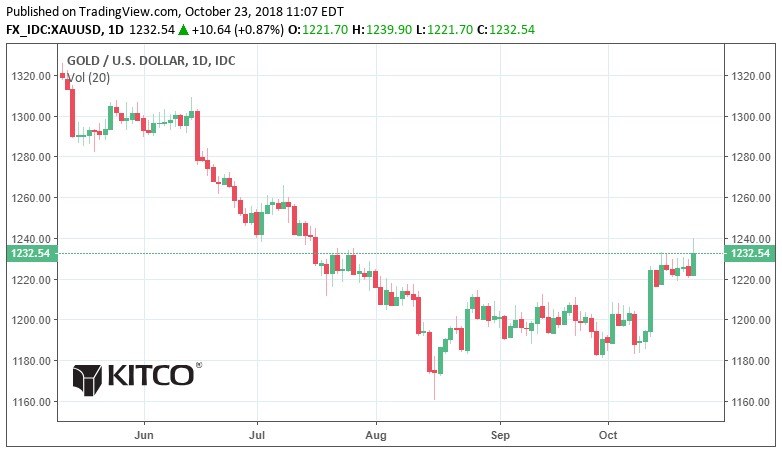 Looking at equity markets, according to reports, the Dow Jones Industrial Average is seeing its worst monthly decline in three years while the S&P 500 is seeing its worth monthly performance in seven years.

According to some analysts, the sharp downturn in equities is related to the ongoing budget crisis in Italy. In an unprecedented move on Tuesday, the European Union rejected Italy’s budget, which proposed a deficit of 2.4% of GDP in 2019.

Streible added that the geopolitical uncertainty in Europe is weighing on equity investors because weak global growth could trickle through to the U.S. economy.

“You can see that a lot of people are worried right now. They are moving to cash and safe-haven assets like gold,” he said.

“Asset allocators are now forced to look at gold as the usual additional alternative to hedge volatility in stocks,” he said.

But some analysts are wondering if this is as good as it gets for gold in the near-term. David Madden, market analyst at CMC Markets, said that while weak equities are supporting gold, the market still has a lot more work to do.

“Things are finally looking up for gold,” he said. “But I think this is the best environment that gold is going to get.”

Madden added that the interest rate play is still a bigger driver for gold prices than the safe-haven play. He noted that the Dow Jones Industrial Average has to drop hundreds of points for gold to rally one percent.

“That is just not sustainable,” he said. “We are in late October and pretty soon investors will be talking about a December rate hike and I think that could put a cap on gold prices,” he said.

Streible, on the other hand, was a little bit more optimistic on gold prices while also warning investors to be cautious in this current environment.

He added that he recommends investors buy at the money call options if they think gold prices have room to move higher.