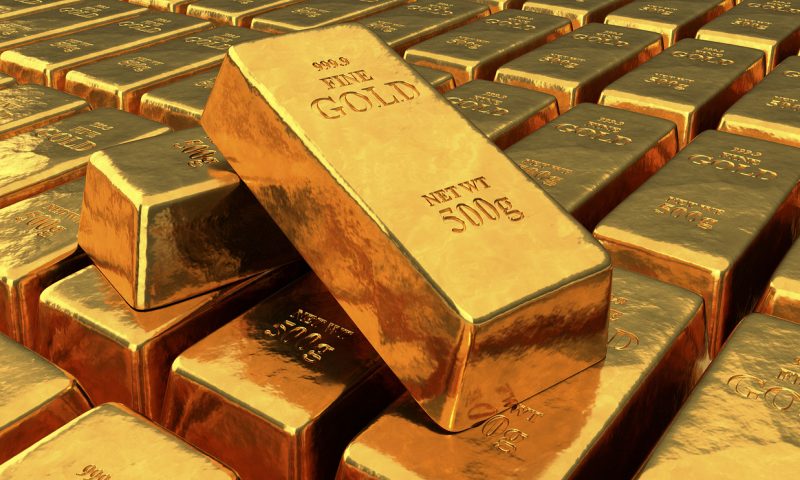 Gold futures settled lower in volatile Thursday trading, but posted a gain for the month with prices supported partly by growing physical demand and expectations that global central banks will be compelled to keep stimulus measures in place to dampen the impact of the COVID-19 pandemic.

Traders moved to “square their books into the end of the month,” said Tyler Richey, co-editor at Sevens Report Research.

Gold “bulls will want to see stable interest rates and renewed recovery in inflation expectations” in order for a rally in gold to continue, he told MarketWatch. That’s “something we are not necessarily seeing today,” and gave some traders an excuse to book profits into month end.

U.S. inflation pressures eased in March. The closely watched personal consumption expenditure price gauge fell 0.3% in the month led by energy prices, pushing down the increase over the past year to 1.3% from 1.8%.

For the month, based on the most-active contracts, prices were up 6.1%, which was the largest monthly percentage rise since August 2019, according to Dow Jones Market Data.

Meanwhile, the European Central Bank, which has taken a number of emergency measures since their last meeting in early March, including a €750 billion ($812.5 billion) Pandemic Emergency Purchase Program, left its interest rates unchanged Thursday. In a press conference, ECB President Christine Lagarde said the eurozone economy could fall between 5% and 12% this year.

The meeting of eurozone monetary-policy makers came a day after the Federal Reserve held federal-funds rates at a range of 0% and 0.25% and vowed to use its policy tools to limit the economic damage from the viral outbreak that has infected millions and claimed hundreds of thousands of lives globally.

The precious metal “reacted well overnight after the aggressive tone from the Fed,” said James Hatzigiannis, chief market strategist at Ploutus Capital Advisors. “The Fed indicated that the U.S. economy will soon produce the worst economic data ever seen and as a result they said more help will be needed and quickly.”

That “escalated the idea, that the Fed is offering the possible scenario of infinite quantitative easing,” he told MarketWatch. Gold then “took a quick dive down after some U.S. economic numbers were released [early Thursday] that were pretty much aligned with forecasts.”

Some 3.8 million American workers who just lost their jobs applied last week for unemployment benefits, bringing a record number of layoffs during the coronavirus crisis to about 30 million in a month and a half.

The moves for gold also come as the World Gold Council said investment demand for bullion soared in the first quarter as the COVID-19 pandemic fueled safe-haven appetite for the precious metal.

Total global first-quarter demand, however, edged up by just 1% from the same period last year to 1,083.8 metric tons.

The GFMS team at Refinitiv reported Thursday that physical gold demand, including jewelry, industrial fabrication and bars and coins, fell 26% year-on-year in the first quarter to 753 metric tons—the lowest level since 2009. Including exchange-traded fund flows, total global gold demand was up 2% at roughly 1,070 metric tons for the quarter.