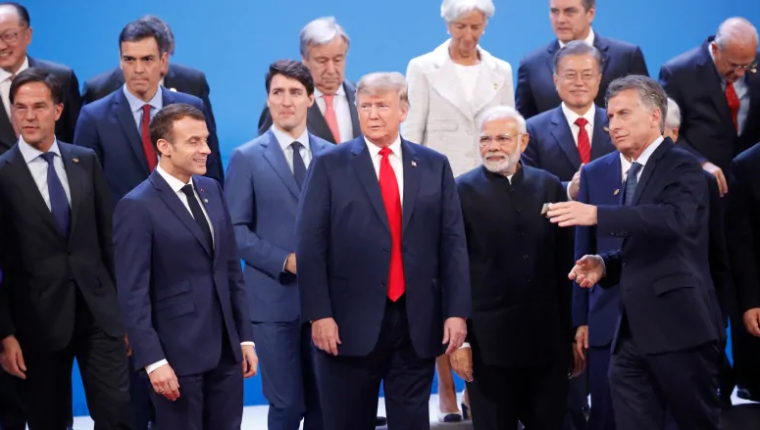 The leaders of the world’s largest economic powers on Saturday backed an overhaul of the global body that regulates international trade disputes, but couldn’t reach agreement to support the Paris accord on fighting climate change.

The Group of 20 industrialized nations called for reforms to the World Trade Organization amid growing global trade tensions, in the bloc’s final joint statement from a two-day gathering in Argentina.

But on climate change, the United States once again marked its differences with the rest of the G20 by reiterating in the statement its decision to withdraw from the Paris Agreement and its commitment to using all energy sources.

The final communiqué recognized trade as an important engine of global growth, but made only a passing reference to “the current trade issues,” after the U.S. delegation won a battle to keep any mention of protectionism out of the statement.

In addition to tariffs on Chinese goods, Trump has imposed tariffs on steel and aluminum imports into the United States this year. Numerous countries have filed litigation at the WTO to contest the levies.

The United States is unhappy with what it says is the WTO’s failure to hold Beijing to account for not opening up its economy as envisioned when China joined the body in 2001.

G20 delegates said negotiations on the final summit statement proceeded more smoothly than at a meeting of Asian leaders two weeks ago, where disagreements on protectionism and unfair trading practices prevented a consensus.

European officials said a reference to refugees and migration — a sensitive issue for Trump’s administration — was excised to ensure consensus.

Meanwhile, the U.S. once again marked its differences with the rest of the G20 by reiterating in the statement its decision to withdraw from the Paris Agreement and its commitment to using all kinds of energy sources.

The other members of the group reaffirmed their commitment to implement the Paris deal and tackle climate change, taking into account their national circumstances and relative capabilities.

With the United States and China locked in growing disputes over commerce and security that have raised questions about the future of their relationship, global financial markets next week will take their lead from the outcome of talks between Trump and Xi over dinner on Saturday.

The first day of the G20 summit offered glimmers of hope for progress between Washington and Beijing despite Trump’s earlier threat of new tariffs, which would increase tensions already weighing on the growth of the global economy.

This year’s summit has proved to be a major test for the G20, whose leaders first met in 2008 to help rescue the global economy from the worst financial crisis in seven decades.

With a rise in nationalist sentiment in many countries, the group, which accounts for two-thirds of the global population and 85 per cent of the global economy, faces doubts over its ability to deal with trade tensions and other geopolitical differences among its members.

Apart from trade and climate change, Russia’s seizure of Ukrainian vessels drew condemnation from other G20 members, while the presence of Crown Prince Mohammed bin Salman at the summit raised an awkward dilemma for leaders.

Saudi Arabia’s de facto ruler, who arrived amid controversy over the murder of Saudi journalist Jamal Khashoggi, has been ignored by other leaders at public events, although he has had a series of bilateral meetings with them in private.

Canadian Prime Minister Justin Trudeau said in a a post-summit news conference Saturday that, during encounters over the course of the summit, he asked Russian President Vladimir Putin to release the Ukrainian vessels and spoke to Prince Mohammed about “the need for better answers on the killing of Khashoggi.”

The trade battle between the United States and China has loomed large over the G20 talks. Washington and Beijing have imposed tariffs on hundreds of billions of dollars on each other’s imports after Trump began an effort to correct what he views as China’s unfair commercial practices.

Saturday’s talks will be a test of the personal chemistry between the two leaders, which Trump has hailed as a warm friendship.

The U.S. leader was coy on Friday even as he noted some positive signs.

“We’re working very hard. If we could make a deal that would be good. I think they want to. I think we’d like to. We’ll see,” he said.

A Chinese foreign ministry official in Buenos Aires said there were signs of increasing consensus ahead of the discussions but that differences persisted.

Beijing hopes to persuade Trump to abandon plans to hike tariffs on $200 billion US of Chinese goods to 25 per cent in January, from 10 per cent at present. Trump has threatened to go ahead with that and possibly add tariffs on $267 billion of imports if there is no progress in the talks.

Trump has long railed against China’s trade surplus with the United States and Washington accuses Beijing of not playing fairly on trade. China calls the United States protectionist and has resisted what it views as attempts to intimidate it.

The two countries are also at odds militarily over China’s extensive claims in the South China Sea and U.S. warship movements through the highly sensitive Taiwan Strait.

On Friday, Xi and leaders from the BRICS group of leading emerging economies — Brazil, Russia, India, China and South Africa — called in a statement for open international trade and a strengthening of the WTO.