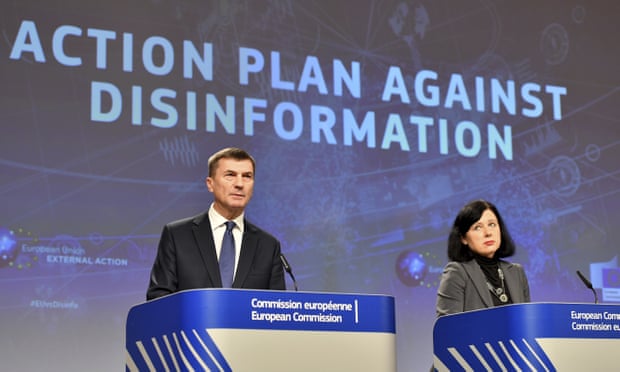 The EU has launched a “war against disinformation” spread by the Kremlin in an attempt to protect next year’s European parliament elections.

As new funding and measures were announced in Brussels, the Russian president, Vladimir Putin, was accused of spending more than £1bn a year to “spread lies” as part of a military strategy to cause division in Europe.

“There is strong evidence pointing to Russia as the primary source of disinformation in Europe,” said Andrus Ansip, vice-president of the European commission.

“Disinformation is part of Russian military doctrine and its strategy to divide and weaken the west. Russia spends €1.1bn a year on pro-Kremlin media. You will also have heard of the ‘troll factory’ based in St Petersburg and the bot armies.”

The commission said it would set up a rapid alert system to help EU member states recognise disinformation campaigns, and increase the budget set aside for the detection of disinformation from £1.69m to £4.4m (€5m). It will also press technology companies to play their part in cracking down on fake news.

Major social media platforms have already signed up to a code of conduct, but they were told by the British security commissioner, Julian King, to “get serious” on living up to their commitments. He said the EU would not stand for “an internet that is the wild west, where anything goes”.

“No excuses, no more foot-dragging, because the risks are real,” he said. “We need to see urgent improvement in how adverts are placed. Greater transparency around sponsored content, fake accounts rapidly, effectively identified and deleted”.

Facebook has admitted there are between 60m and 90m fake Facebook accounts, accounting for between 3-4% of users on the platform, King said – “and some of those accounts are the most active”.

Longer term, the EU needed to invest in media diversity and educate the public to be aware of the news they digest, King said, but that in the short term Brussels needed to see an “improvement in how we detect and call out disinformation”.

“We have said publicly, and we repeat it here today, that if the necessary progress is not made we will not hesitate to reconsider our options including eventually regulation,” he said.

The commission will issue a progress update in January on social media companies’ attempts to close down accounts disseminating disinformation, and there will be further monthly reports up to next May’s elections to the European parliament.

Ansip, a former prime minister of Estonia, said he did not believe the increased budget of €5m was large enough to deal with the extent of disinformation, saying that one St Petersburg troll factory, known as the Internet Research Agency, has 1,000 full time workers.

“But in comparison with €1.9m it is a little bit better,” he said. “Our aim is not to create something like they have already in Russia.

Ansip said the Russian disinformation campaigns started “during the KGB time” and that sources said about 85% of the KGB’s budget was spent “not to get some secrets from somewhere but to spread lies”.

Mariya Gabriel, the commissioner for digital economy, who joined Ansip, King and the justice commissioner Věra Jourová in a joint press conference, compared the attempts to deal with Russian disinformation to a war.

Putin and his government have repeatedly denied claims that it has sought to interfere in foreign elections, including the US campaign that delivered the White House to Donald Trump.