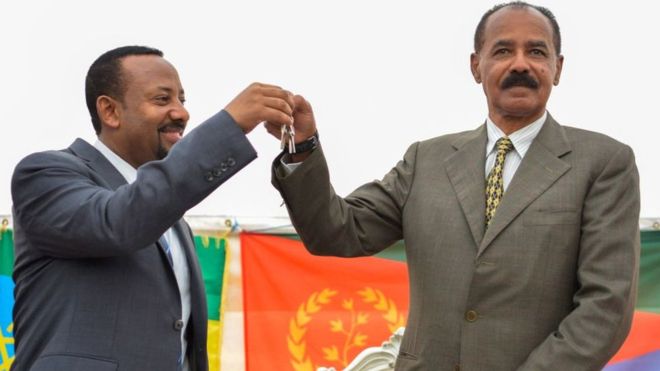 The UN Security Council has unanimously agreed to lift sanctions against Eritrea after nine years.

The resolution, drafted by the UK, was backed by the US and its allies.

The UN vote comes amid a thaw in relations between Eritrea and its neighbours following years of conflict.

BBC World Service Africa editor Mary Harper says the politically repressive state had long been a global pariah, and was likened by some commentators to North Korea.

Eritrea agreed a peace deal with Ethiopia in June following two decades of animosity, while the leader of Eritrea and the UN-backed government in Somalia recently signed a joint cooperation agreement.

Why were sanctions imposed?

The resolution, backed by 13 votes in favour, was passed after the UN Security Council accused Eritrea of arming, training and equipping armed groups including al-Shabab.

The UN had frequently expressed concern about the flow of weapons into Somalia, where Islamist militants were battling government forces for control of the capital Mogadishu.

Eritrea has also been criticised for human rights abuses and mandatory national service conscription, which has led to tens of thousands of young Eritreans fleeing the country for Europe.

The asset freezes and travel ban affected individuals and businesses, as well as the Eritrean leadership.

However, the Council members now quote experts as saying there was no proof Eritrea backed al-Shabab.

What does Eritrea say?

The Eritrean government has always denied supporting al-Shabab militants, calling the claim a “fabrication” created by US intelligence officials. Ethiopia is a close ally of the US, especially in the fight against al-Shabab.

When they were imposed, Araya Desta, Eritrea’s ambassador to the UN, dismissed the sanctions as “ludicrous punitive measures”.

Eritrea occupies a strategic location on the Red Sea, which connects Europe, Africa and the East. However, its economy has suffered after years of sanctions.

The Eritrean government now says it wants compensation for the sanctions, which it insists were politically motivated.

How peace has broken out in the Horn of Africa

Since the sanctions were imposed, Eritrea has lobbied and fought hard against them. But three times over that period, the UN Security Council has always voted to maintain them, claiming the country was a destabilising factor in the Horn of Africa region.

But all that seems to have changed after Eritrea signed a landmark agreement with Ethiopia in June, committing to end a bitter two-decade dispute.

Since then, diplomatic ties have resumed and both air and land transport between the two countries have re-opened.

Eritrea, Ethiopia and Somalia have now signed a joint agreement of cooperation, and leaders of the three countries have met personally on three different occasions this year – something that hadn’t happened in years.

Relations between Eritrea and Djibouti are also thawing after years of a border dispute. There is now even an ambitious talk of the Horn of Africa countries forming an economic bloc of sorts.

Many analysts believe that there are still many issues like the border disputes to resolve before that can be achieved, but so far leaders of the region are daring to believe.

Chaos and confusion as Rohingya refugee repatriations set to begin