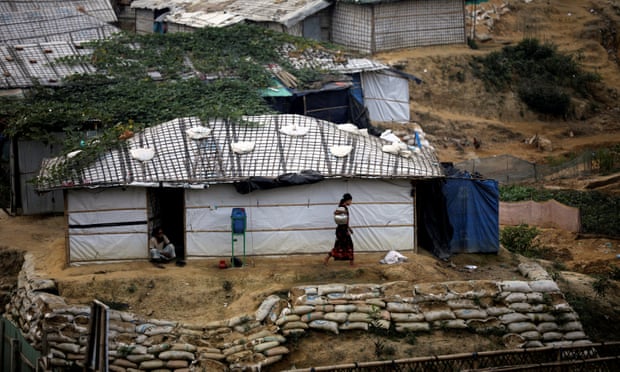 Confusion and uncertainty remained on Thursday over whether Bangladesh would begin the scheduled repatriation of Rohingya refugees to Myanmar despite overwhelming evidence that none are willing to return voluntarily.

Thousands of the Rohingya refugees who had been put on a list “approved” for return to Myanmar- due to start today- have gone into hiding out of fear that, despite assurance by the Bangladesh authorities that repatriation will be “totally voluntary”, the security forces would forcibly send them across the border.

By mid-morning on Thursday, the presence of the military and the police remained heavy in the camps but no attempts to repatriate refugees had begun.

The few who are reportedly willing to return are 450 Hindu families who are on the list of 2,260 refugees who have been vetted and approved by Myanmar to come back.

The UNHCR, who have actively opposed the repatriation plans out of concern that the current conditions in Myanmar do not guarantee the rights and safety of the Rohingya, began a process of interviewing every refugee on the list to determine whether they wanted to return but struggled to find most of them.

But by Wednesday night, hours before repatriation was due to begin, the UNHCR had spoken to just 48 families who all said they did not want to return to Myanmar in the current conditions.

The Bangladesh refugee commissioner was unavailable for comment on Wednesday night on whether the repatriations would proceed despite the mass resistance.

Qadar, who like many Rohingya uses one name, told the Guardian that, from Jamtoli camp alone, several thousand refugees had gone into hiding in the forests and nearby hills since Wednesday evening to make sure they were not sent back to Myanmar against their will.

“Almost all the refugees who are in the list have disappeared,” said Qadar, who was among those sheltering in the forest. “Many are saying that in this situation security forces would pick up other Rohingya who are not on the list and push them across the border to meet their repatriation-related targets.

“In Myanmar often we the Rohingya men fled our villages and spent nights hiding in forests and hills to avoid arrest by Burmese forces who usually raided at night,” he added. “We never thought that even in Bangladesh we would someday need to stay away in hiding in the forest this way under the open sky.”

Fears in the Cox’s Bazar camps, particularly Jamtoli, Unchiprang and Chakmarkul, intensified on Wednesday as the army, police and paramilitary moved in to try and prevent any further Rohingya families going into hiding to avoid repatriation back to Myanmar. Confusion reigned as it was unclear if the repatriations would begin on Thursday, as per the schedule laid out by both the Myanmar and Bangladesh governments.

Rohingya refugees told the Guardian of the multiple ways that the Bangladesh authorities were trying to “persuade” refugees to go back, including telling them that it was the only way they would get the Myanmar government to give them rights and citizenship.

They also made direct threats. Saifullah, who lives in Balukhali camp, said that the CIC had warned the majhis of “stern actions” if the Rohingya who are in the repatriation list do not return to Myanmar.

“The CIC have been telling Rohingya refugees will face hardship if they do not return to Myanmar,” he said. “They are threatening to stop supplying rations to refugees, saying they will be barred from working with the different NGOs and will not have the freedom to move around freely.”

The UN has called on both governments to halt the “rushed” repatriation plans but the pleas appear to have fallen on deaf ears. Bangladesh, however, tried to quell the panic by instructing NGOs it maintained its commitment to voluntary returns and that all NGOs should continue their work as usual on Thursday.

There are over 700,00o Rohingya refugees living in Cox’s Bazar who fled a brutal crackdown by the Myanmar military in August 2017, which was described by the UN fact-finding mission as genocide. The violence saw women raped, children massacred and thousands killed, while most Rohingya villages in Rakhine state were burned to the ground. According to the head of the UN fact-finding mission, the genocide in Rakhine against the muslim minority is “still ongoing” and there were demonstrations this week among Buddhist Rakhine communities who protested against the return of the Rohingya.

Myanmar has insisted they are ready for returns and laid the blame for any delays at Bangladesh’s door. Officials have stated that refugees from Cox’s Bazar will be processed in one of the two centres built by Bangladesh and then transported back to Myanmar either by boat or on land to Hla Po Khaung transition camp, in Rakhine state.

The Myanmar government have assured the international community the Rohingya will then be housed in new homes built in Maungdaw, one of the three areas the Rohingya had lived before the crackdown, though they will not be allowed to travel outside of the township. Most will also be unable to return to their original homes and villages because they were burned down by the military in the crackdown.