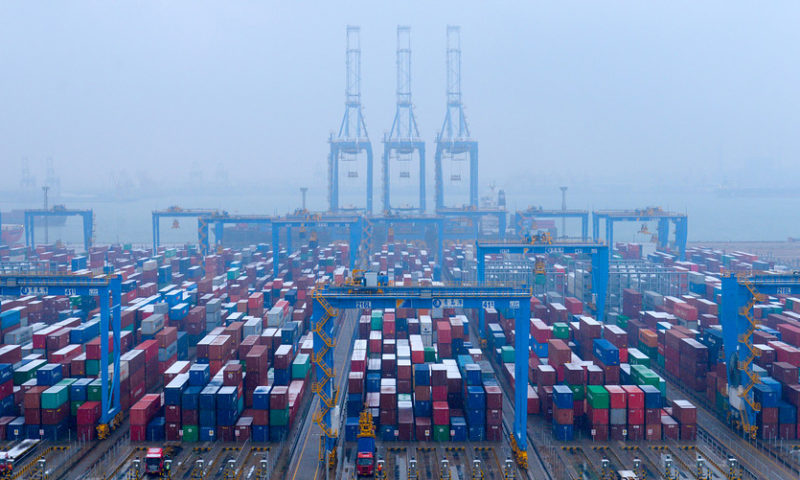 Stocks fell sharply Friday, ending the week on a bleak note and sending the Dow Jones Industrial Average into correction territory after a batch of weaker-than-expected economic data out of China and Europe sparked fresh worries about the state of the world’s second-biggest economy and prospects for global growth.

How did benchmarks trade?

The drop left the Dow more than 10% below its Oct. 3 record high, meeting the widely used definition of a correction. The blue-chip gauge joined the S&P 500 and the Nasdaq in correction territory.

However, those words appeared to fall on deaf ears as investors continued to push aside trade optimism, and instead focused on collateral damage from the back and forth. Investors have been weighing several pieces of news over the past few days showing that trade tensions between the U.S. and China may be cooling, with optimism driving investors into equities.

The effect of these data may be tempered by news of actual changes to Chinese trade policy as a result of the U.S.-China negotiations. China’s Ministry of Finance announced Friday that it would suspend a series of tariffs on American-made automobiles and parts for three months starting Jan. 1, according to Reuters. This follows one day after China’s first major purchase of U.S. soybeans since it raised tariffs on the legumes in July.

The S&P 500 financial sector entered bear-market territory, defined as a 20% pull back from a peak, with Friday’s close, according to Dow Jones Market Data.

Johnson & Johnson JNJ, -10.04% was the Dow’s biggest loser Friday, with shares tumbling 10%, after a Reuters report alleged the company knew for decades that its baby talcum powder was sometimes contaminated with the carcinogen asbestos. Johnson & Johnson said the report was “one-sided, false and inflammatory.” The decline knocked around 100 points off the Dow.

Shares of Starbucks Corp. SBUX, -2.35% were in focus Friday, following its investor day Thursday, when the company announced ambitious plans for expansion in China, as well as a plan to return $25 billion to shareholders between now and 2020. The stock fell 2.3%

XPO Logistics XPO, +15.84% stock was in focus after the release of a short seller report on Thursday that accused the company of hiding poor returns with aggressive accounting tactics. The company responded to the report, accusing it being “intentionally misleading.” The stock rose nearly 16%, after falling more than 26% during trade Thursday.

What did data say?

Retail sales rose 0.2% in November from the month previous, surpassing expectations of a 0.1% jump, according to a MarketWatch poll of economists.

U.S. industrial production rose 0.6% in November versus consensus expectations of 0.4%, per a MarketWatch poll. Capacity utilization rose ten basis points to 78.5% from October, below estimates of 78.6%.

The U.S. purchasing managers index for the manufacturing sector fell to a 13-month low of 53.9 in December, while the services sector survey fell to an 11-month low of 53.4. A reading of more than 50 indicates an expansion in activity.

Karyn Cavanaugh, senior market strategist with Voya Investment Management, told MarketWatch that disappointing economic data out of China was the biggest driver of Friday’s losses. “The Chinese data was a dirt sandwich, not because it showed deceleration in the Chinese economy, but because it’s showing that all the stimulus they’ve done can’t turn it around.”

She argued that the losses snowballed throughout the day because “people are worried that we will reach technical indicators” that could trigger a bout of algorithmic selling.

“Global markets…are once again in risk-off mode,” wrote Joel Kulina, analyst at Wedbush Securities in a note. “Price action and sentiment remain poor — investors are simply trying to limit performance damage rather than reach for outperformance.”

“Indeed, investors are right to be worried about global growth as China economy continues to sputter,” said Stephen Innes, head of Asia-Pacific trading at Oanda, in a note to clients. “The data lend support to the market’s view that things will get worse in China before they get better, this despite investment rising.”

Here’s why the Fed won’t save the stock market, despite its worst December start since 1980