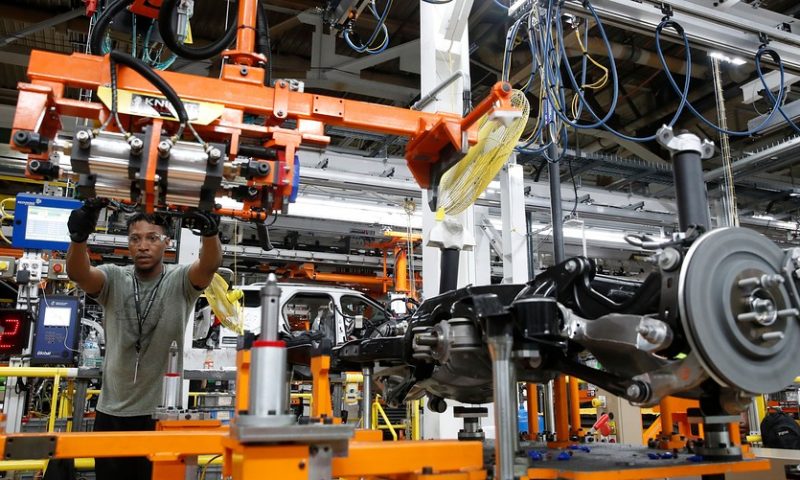 The losses were the sharpest one-day percentage and point drops for all three indexes since Oct. 8, according to Dow Jones Market Data.

Stocks were pulled lower by a disappointing U.S. manufacturing survey that pointed to a fourth straight month of contraction for the sector, with the Institute for Supply Management’s purchasing manager’s index unexpectedly falling to 48.1% in November from 48.3% in October. Economists polled by MarketWatch expected a reading of 49.2%. Readings below 50% reflect business conditions worsening.

“The ISM report wasn’t encouraging, especially if you look at the new orders component,” said Shawn Cruz, manager of trader strategy at TD Ameritrade, in an interview. “Construction also came in on the downside. This puts pressure on the other data points due this week, like the jobs numbers on Friday. Consumer sentiment will be another important data point on Friday.”

The data overshadowed a separate survey on U.S. manufacturing released by Markit on Monday, which showed the sector gaining steam, with a 52.6 reading, versus October’s 52.2.

Andrew Hunter, senior U.S. economist at Capital Economics, cautioned that manufacturing still wasn’t “out of the woods,” in a client note on Monday, and warned that conditions underlying manufacturing “remain unusually weak.”

Adding to the jitters are higher U.S. stock valuation levels, which Cruz warned can make “the market prone to sudden, fast corrections,” particularly if investors think the slowdown in manufacturing is accelerating, or there are concerns about the health of the consumer.

Investors also got a sharp reminder of the potential for negative trade headlines, with earlier stock gains erased after Trump accused Brazil and Argentina of “presiding over a massive devaluation of their currencies, which is not good for our farmers.” Trump tweeted that, effective immediately, “I will restore Tariffs on all Steel & Aluminum that is shipped into the U.S. from those countries.”

Commerce Secretary Wilbur Ross said Monday that President Trump is prepared to levy more duties on Chinese goods in the absence of a trade deal, as the clock ticks toward the Dec. 15 deadline for placing 15% tariffs on consumer good from China.

Meanwhile, China is insisting that U.S. tariffs be rolled back as part of any “phase one” trade deal, China’s state-run Global Times said Sunday. And Axios reported Sunday that deal is unlikely to be agreed upon before late December, but that Trump is expected to hit pause on additional tariff hikes to keep negotiations alive.

In other economic data, the government said construction spending fell 0.8% in October from a 0.3% decline in September. Economists were expecting a 0.4% increase, according to a MarketWatch poll.

Dow component Intel Corp.’s INTC, -0.67%  stock fell 0.6% Monday after it announced the completion of the sale of the majority of its smartphone modem business to Apple, a $1 billion deal announced July 25.

McDermott International Inc. MDR, +9.95%  stock rallied 9.9%, after the energy-services company announced access to $350 million in financing and a forbearance agreement with some of its creditors.

Amazon.com Inc. AMZN, -1.07%  stock lost 1% as Cyber Monday got under way, one of the most important days of the year for the online retail giant.

Shares of Roku Inc. ROKU, -15.15%  plunged 15% after Morgan Stanley analysts said stock of the TV-viewing platform looked too expensive and likely was head into reverse as competition from other steaming services and apps heats up.

Shares of Apache Corp. APA, -12.30%  sank 12% after the firm gave an update on the status of a new offshore well, Maka Central #1, off the coast of Suriname, but provided no new information on site’s potential profitability.

The yield on the 10-year U.S. Treasury note TMUBMUSD10Y, +0.19%  rose 5.7 basis points to 1.835%, its biggest one-day yield gain since Nov. 7, according to Dow Jones Market Data. Yields and bond prices move in opposite directions.

Apple will make some big changes with the next iPhone, JPMorgan says