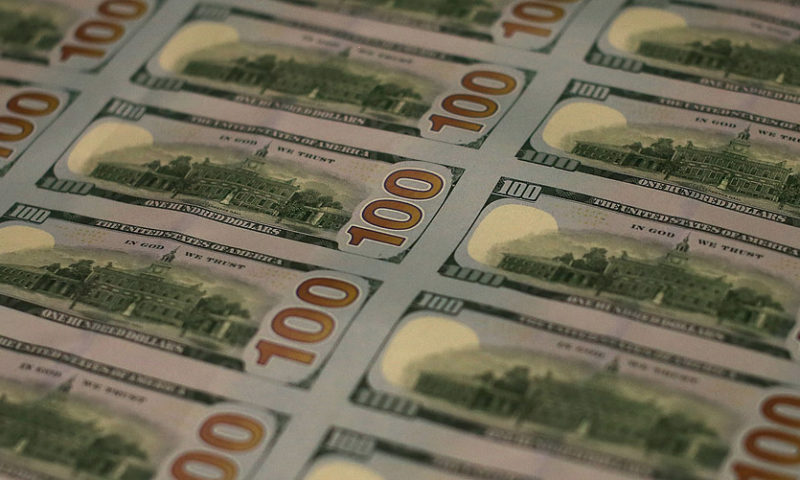 A whiff of accelerating wage growth provided a modest lift for the U.S. currency Friday, putting a closely watched dollar index on track for a weekly gain.

The Labor Department said the U.S. economy created 201,000 new jobs in August, while the unemployment rate was left unchanged at an 18-year low of 3.9%. The main event for traders, however, was the wage component, which showed a 0.4% monthly rise in average pay, topping expectations for a 0.2% rise. Year-over-year wage growth was 2.9%, p from 2.7% in July and the fastest since June 2009.

“With activity booming and core PCE inflation having risen to the 2% target, the continued strength of the labor market keeps the Fed firmly on track to raise interest rates twice more this year, starting with a 25 [basis point] hike at the FOMC meeting in two weeks’ time,” said Andrew Hunter, U.S. economist at Capital Economics, referring to the Fed’s preferred inflation measure

“No sign of U.S. slowdown, empowering President Trump in his trade tactics, and keeping the Fed on its steady rate-hiking path. That’s a recipe for continued stress in FX,” wrote Kit Juckes, global macro strategist at Société Générale.

The White House is expected to move as soon as Friday to impose tariffs of 25% on as much as $200 billion in Chinese goods, on top of the $50 billion in goods already facing 25% levies.

In another sizable currency swing, the Australian, known as the Aussie AUDUSD, -1.2920% fell to a 2½-year low of $0.7098, according to data from FactSet, as the trade fallout between the U.S. and China continues to weigh on the commodity-dependent currency. Friday’s move puts the Aussie down 8.8% year-to-date against the greenback.

Overall dollar strength, the ICE dollar gauge is up more than 3% year-to-date. The Fed’s slow but steady tightening pace and moves by other major central banks to tighten policy, or at least begin winding down stimulative measures, are seen as contributors to stress in emerging-market currencies.

Countries with high current-account deficits have been in focus given their exposure to dollar-denominated loans, which are harder to service as the U.S. currency appreciates. While countries like Argentina and Turkey have their own significant homegrown problems, concerns that a herd mentality could drive investors out of emerging-market assets have been on the rise, analysts said.