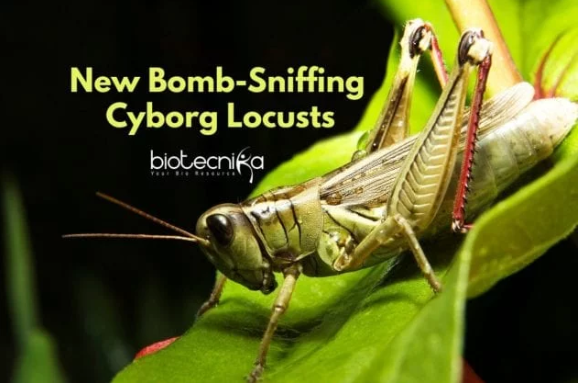 In order to prevent terrorist attacks and detect bombs, locust’s sense of smell was successfully ‘hijacked’ by scientists.

The project was funded by the US Navy. Scientists could analyze the neural activity in the insect’s brain when it encounters certain chemicals like ammonium nitrate – a commonly used substance in bomb-making, by implanting electrodes in its brain. A distinct pattern of activity appeared in the insects’ brains just within 500 milliseconds when the research team exposed the locust to five different explosives.

In the locusts’ head, a ‘minor’ incision was made which allowed the insects to continue moving their antennae and mouthparts without restriction or interference. They were given the ability to sense substances in a wide range as the scientists added around 50,000 olfactory neurons to their tiny antennae.

As American locusts are known to be ‘sturdy’ and ‘can carry heavy payloads’, researchers chose this in the project.

There was no need for extensive surgery as the team only had to make a ‘minor’ incision in its head to transform the insects into cyborgs. This allowed the bugs to keep using their antennae and cyborgs.

To allow a human operator to control the insects’ movements, the researchers designed the locust with tiny wheels. To improve the operator’s control over the insects, they are now working on silk-based ‘nanotattoo’ implants. The operator can steer it with remote control as this would stick to the locust’s wings and will generate heat. They will also be able to collect samples of volatile organic compounds nearby through the tattoos that will be studded with ‘plasmonic nanostructures’.

To work out the smells the insects are detecting, using these, the chemical make-up of the compounds can be analyzed.

An associate professor of biomedical engineering in the School of Engineering and Applied Science at Washington University at St. Louis, the study’s lead scientists, Baranidharan Raman said, “This work is expected to develop and demonstrate a proof-of-concept, chemical-sensing hybrid locust-based approach in detecting explosives.”