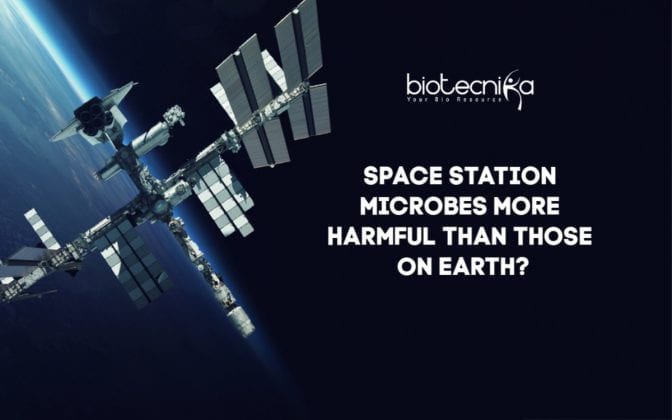 How harmful are microbes on space stations? Do they become “superbugs”? Rest assured, they don’t!

Microbes such as fungi and bacteria also go along for the ride with humans, when humans and equipment go to the International Space Station. In Extremophiles, a recent ESA (European Space Agency) study, it was found that the resulting microbes are not extremophilic (able to thrive in environments previously thought uninhabitable), they are not more resistant to antibiotics than those found on Earth in similar conditions.

Finding whether the microbiome on board the space station is more resistant or more harmful than it would be on the ground was the idea behind this study. Christine Moissl-Eichinger, the study’s Principal Investigator said, “We wondered if the microbes would be stressed and might react in a bad way as spaceflight causes some crew members to have periods of stress.”

Microbes must deal with exposure to microgravity, radiation, cleaning agents and metal surfaces to live in orbit above Earth. The microbiome of the inside of the space station was studied. Details on the varieties and locations of the station’s microbiome were published in a recent paper. Scientists are careful to avoid transferring extremophiles to a new environment on a visiting vessel as they can be dangerous to human health and equipment.

With the arrival of new hardware, cargo or crew, new microbes are introduced in the station as it is a closed system. On Earth, a cleanroom with controlled access, staff with protective clothing to minimize particulate transfer and their entries and exits through airlocks, is a similar environment to the space station.

With an Earth-based cleanroom that prepares items for the station, ESA researchers compared the station’s microbial community. The key to the investigation’s findings turned out to be this comparison.

Moissl-Eichinger said, “The data from the station and the date from normal ground surroundings were compared by analyzing these two data sets. We found that the microbes were not stressed, the resistances were not higher, their virulence was not increased. There were no particular differences to be seen.”

Most of the microbes on the space station are those that are associated with human presence, just as expected. Many of these tiny organisms are beneficial to us and we literally cannot live without these organisms.

It was found that the space station has developed a core microbiome of 55 different microorganisms after almost 20 years of continuous human presence. The long-term mix of biological material is stable even though the quantities change over time.

Moissl-Eichinger said, “We have more than 15 years old samples from the station. In any sample from the space station, there is one group of microorganisms that can be detected, which means that these microbes are surviving very well.”

The microbes’ reaction to the metal surfaces was the one significant difference between the ground areas studied and the station microbiome.

There are some microbes that create biofilms or corrosion by responding negatively to the space station. Some microbes, especially fungi, can become technology-loving, or “technophilic,” resulting in growth o inside panels, wiring connectors, on metal areas. This was seen in Russia’s Mir space station and it caused progressive destruction of electrical outages and one of its windows. It is important to keep metal surfaces dry because these microbes require wet conditions.

Designers of the space station ensured that the station does not have areas that collect moisture and are inaccessible to maintenance activities. Samples from the space station showed the presence of some technophiles despite the dry environment.

Moissl-Eichinger explained, “Indications of the microbes adapting to the surfaces on board were found. Comparing these microbes to those found on the ground, they were really different. As these technophilic organisms struggle to stay alive, they attack the surfaces.”

Keeping surfaces dry and conducting periodic sample collection was recommended by the researchers. The potential benefits of equipment capable of identifying microbes in space without returning to Earth or using cultures were highlighed. Currently, for the Biomolecule Extraction and Sequencing Technology (BEST) investigation, such equipment called the Biomolecule Sequencer, is being used. Rather than stressing microbes by constant cleaning, crew members could target areas of concern when needed with quick-turnarounf information.

Cyborg Locusts – The Bomb-Sniffing Dogs Of The Future?