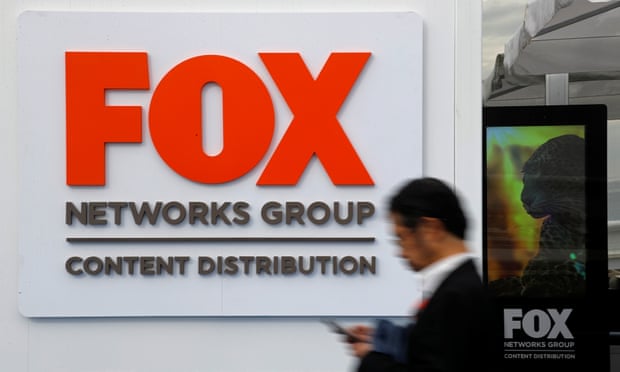 Fox is facing growing criticism and calls for a boycott amid accusations that language used on its programming is fueling antisemitism, prejudice and violence.

The network has even banned a guest who used incendiary language to link billionaire George Soros to the migrant caravan.

Fox Business Network condemned comments by a guest on host Lou Dobbs’s show that critics saw as an antisemitic trope.

Chris Farrell of the conservative group Judicial Watch said in an appearance on Lou Dobbs Tonight that the caravan of Central American migrants seeking to reach the United States is organized by groups whose affiliates “are getting money from the Soros-occupied state department”.

Soros is a financier and liberal donor and activist who is frequently the target of antisemitic vitriol. Last week, a pipe bomb was found in his mailbox, allegedly sent by a Florida man who promoted rightwing conspiracy theories about Soros.

The Dobbs segment originally aired on Thursday, but drew notice after it was rebroadcast Saturday, after the deadliest antisemitic attack in US history killed 11 people at a Pittsburgh synagogue.

Critics likened Farrell’s language to the term “Zionist-occupied government,” a trope used in white nationalist circles to suggest the US government is controlled by Jews.

Gary Schreier, the senior vice-president of Fox Business Network programming, said Farrell will not be booked as a guest in the future on either Fox Business or Fox News.

“We condemn the rhetoric by the guest on Lou Dobbs Tonight. This episode was a repeat which has now been pulled from all future airings,” he said in a statement.

Dobbs also sparked controversy with a tweet last week where he labeled bombs sent to Soros and other prominent Democratic figures “fake”. Federal authorities have confirmed they were real.

“Fake News—Fake Bombs Who could possibly benefit by so much fakery? #MAGA #America First #Dobbs,” he said in the tweet, which was later deleted.

It is the latest controversy for the network, which has drawn renewed criticism after the spate of violence by conspiracy-peddling white supremacists. Some of the complaints are now coming from fellow conservative-minded figures.

After Saturday’s shooting, a top editor at the Financial Times called for a boycott of Fox.

“The most effective thing Americans can do is boycott companies that advertise on Fox. They bankroll the poison that goes from the studio into Trump’s head. The second is vote,” tweeted Edward Luce, the paper’s US national editor.

On Monday morning, the Fox & Friends host Brian Kilmeade warned of “diseases” that could be carried by caravan members as “entire populations” approach the United States.

“No disease any refugee might bring to America is as dangerous as the disease of fear, bigotry and hatred now being spread in America by Fox,” tweeted Kristol, the editor at large of the Weekly Standard.

He also blasted Fox over the Dobbs episode, saying: “This repulsive and dangerous filth is bring spewed courtesy of a publicly owned corporation. Will no one on the board, in management, or in a position of influence at Fox speak up? Will no one act? Or is Fox perfectly happy to give bigotry sanction and violence its assistance?”

Even the conservative media blogger Matt Drudge turned on the network, saying in a tweet: “A segment on Fox News this morning where hosts laughed and joked their way through a discussion on political impact of terror was bizarre. Not even 48 hours since blood flowed at synagogue? Check your soul in the makeup chair!”