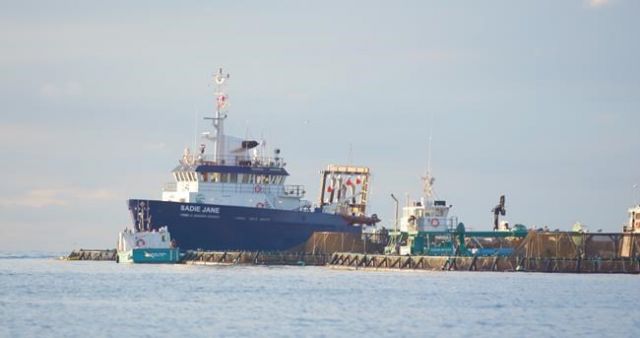 For the Irvings, it was Bouctouche. For the McCains, Florenceville.

Now, in tiny Black’s Harbour, in between an Irving gas bar and the local Freshmart, is a small, two-storey brick building that is head office for New Brunswick’s newest family-owned multinational.

And it is about to get bigger. Founded 33 years ago, the firm is set to complete its latest acquisition, growing its global workforce to some 9,000 employees.

Cooke is in the final stages of buying one of the largest shrimp farming companies in Latin America, although exact details are being withheld until the deal is complete in the next few weeks.

“Cooke Aquaculture started in 1985 by Gifford Cooke and his two sons Michael and Glenn. They started with farming 5,000 salmon in a pen,” said Joel Richardson, vice-president public relations for Cooke Aquaculture.

“That grew over the years through approximately 100 acquisitions since 1985 globally. We have now become the largest independent seafood company in the world. We are independently, family owned, right here, and Black’s Harbour is our head office,” he said.

Company revenues are expected to be $2.4 billion for 2018. Cooke operates 657 vessels and 25 processing facilities. It operates under a number of brands including True North Seafood Company, Icicle Seafoods and Wanchese Fish Company.

Growth started quite naturally for the Cookes. Four years after opening their first salmon cage, they needed a supply of eggs and smolt, so they bought a hatchery.

The corporate website details the subsequent purchases, including feed plants, distributors, processing plants and other aquaculture and wild fish operations.

“We have farmed salmon operations in Chile, Scotland, Maine, Washington state and we also do sea bass and sea bream in Spain. We have wild cod operations in the United States and down in Latin America as well,” Richardson said.

About 40 per cent of Cooke’s seafood business is wild cod.

Despite the growth around the world, the company has kept its roots in rural New Brunswick and has about 2,000 employees here.

“Entrepreneurs and families in New Brunswick have a special connection to where we’re from,” said Richardson.

Observers liken them to dynasties like the Irvings and McCains, local family businesses that have made their mark on the North American stage.

Donald Savoie, an expert in economic development at the Universite de Moncton, said there’s a common mindset to the family-run, resource businesses that have their roots in rural New Brunswick.

“When you start in natural resources you don’t need much start-up capital. You don’t need venture capital, you don’t need the stock market. You need opportunities and an entrepreneur with a single-minded purpose,” he said.