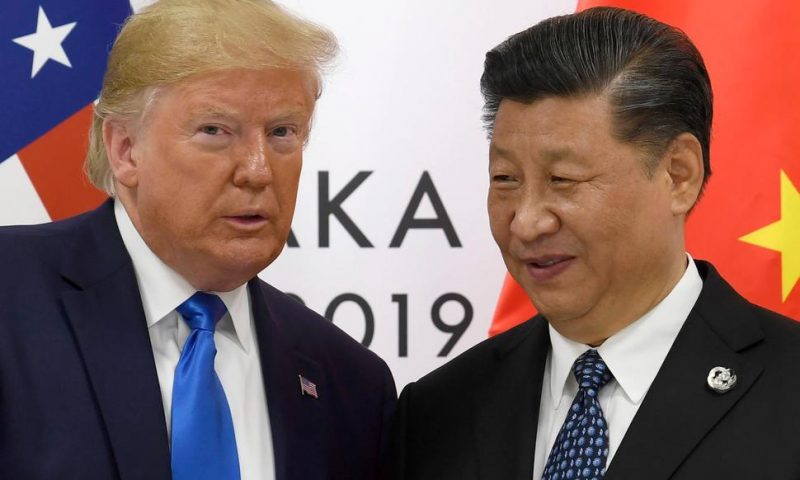 Chinese President Xi Jinping says Beijing wants to work for a trade deal with the United States, but if need be will ‘fight back’.

BEIJING — President Xi Jinping said Friday that Beijing wants to work for a trade deal with the United States but is not afraid to “fight back” to protect its own interests.

Echoing the upbeat tone adopted by other Chinese officials in recent days, Xi told a visiting U.S. business delegation that China holds a “positive attitude” about the trade talks.

“As we always said we don’t want to start the trade war, but we are not afraid,” Xi said. “When necessary, we will fight back but we have been working actively to try not to have a trade war.”

Later Friday, President Donald Trump reiterated his oft-stated assertion that the world’s two biggest economies are “potentially very close’’ to forging a modest “Phase 1” agreement. Such an agreement would be expected to include increased U.S. farm sales to China but to leave bigger points of conflict largely unresolved. These include long-standing allegations that China steals trade secrets and pressures foreign companies to hand over technology.

“We have a deal potentially very close,’’ Trump said in a phone interview with “Fox & Friends.”

Yet the president also insisted that Xi “wants to make it much more than I want to make it. I’m not anxious to make it.’’

The latest flareup in trade tensions came after Trump imposed punitive tariffs last year on billions of dollars’ worth of Chinese exports to the U.S., seeking to ramp up pressure for changes in Chinese trade and investment policies.

China has retaliated with tariff hikes of its own. Sanctions have gradually escalated and trade talks have made only halting progress. But the two sides are working toward what they say will be a preliminary agreement to pave the way for tackling more complex issues.

During the meeting at Beijing’s ornate Great Hall of the People, Xi reiterated to the group China’s stance that a deal requires “mutual respect and equality.”

“We want to work for a Phase 1 agreement on the basis of mutual respect and equality,” Xi told the group.

The Wall Street Journal reported Thursday that China’s lead negotiator in the talks, Vice Premier Liu He, has invited his U.S. counterparts to Beijing for more talks, suggesting there may be some progress.

However, the prospects even for a more general deal look uncertain, given that China has said it wants a promise from the U.S. side to gradually reduce the tariffs already in place. It’s unclear if the U.S. side would be willing to do that.

Pressure is building as financial markets grow increasingly jittery over prospects for a breakthrough.

Trump agreed to hold off on raising tariffs further last month while the two sides talked. But the Washington is still due to hike tariffs on $160 billion worth of imports from China next month.

That increase would boost prices on smartphones, laptops and many common household goods.

Ultimately, the U.S. side wants China to scrap a blueprint for state-led development of industrial leadership in advanced technologies such as robotics and artificial intelligence. Foreign companies also object to policies and practices they say force them to hand over technology in return for access to the vast Chinese domestic market.

In the meeting Friday, Xi emphasized that Beijing will not yield its own “financial sovereignty,” hinting at limits to China’s flexibility on issues the ruling party considers vital for the country’s future.

He drew from historical references, perhaps mindful of the important role Kissinger played along with the late Premier Zhou Enlai in brokering the rapprochement between Washington and Beijing in the early 1970s after decades of Cold War alienation.

China is finding its way “just like feeling the stones while crossing a river,” Xi said, in an expression famously used by Deng Xiaoping, the revolutionary leader who led the “reform and opening up” era beginning in the late 1970s.

“We are working to realize the Chinese dream of renewal of our nation,” Xi said.