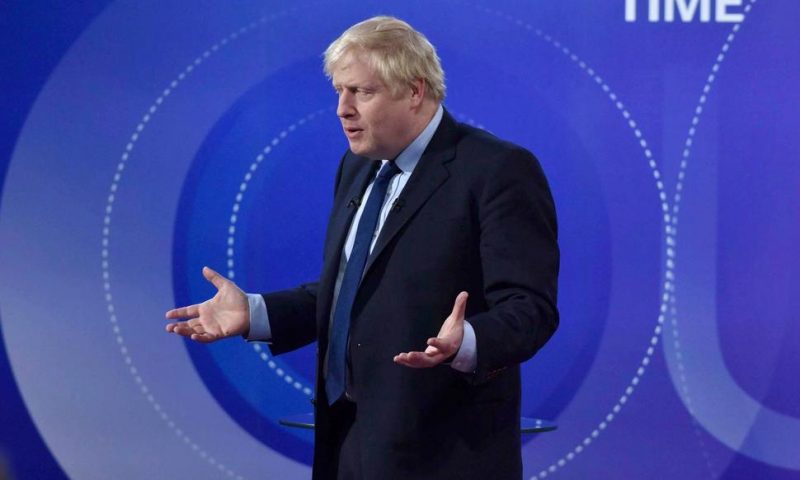 The leaders of Britain’s four biggest political parties are facing tough questions from a studio audience as the focus of the election broadens beyond Brexit.

LONDON — Britain’s Dec. 12 vote has been dubbed the “Brexit election,” dominated by the country’s stalled exit from the European Union. But political parties are also trying to win over voters more worried about the U.K.’s stuttering economy and frayed social fabric.

The electorate remains deeply skeptical of politicians’ promises, if a televised question-and-answer session on Friday is any indication.

Johnson pushed for the December election, which is taking place more than two years early, in hopes of winning a majority and breaking Britain’s political impasse over Brexit. He says if voters give the Conservatives a majority he will “get Brexit done” by getting Parliament to ratify his Brexit divorce deal and taking the U.K. out of the EU by the current Brexit deadline of Jan. 31.

But Johnson’s attempts to get that message across were derailed Friday by tough questioning. He was accused by members of the BBC audience of dodging scrutiny, grilled about rising child poverty and pressed on his refusal to publish a parliamentary report on Russian attempts to interfere in U.K. politics.

Johnson said there was “absolutely no evidence” of Russian interference.

He was also put on the defensive by an audience member who asked about his offensive remarks in speeches and articles. Johnson has called Papua New Guineans cannibals, used the derogatory term “piccaninnies” to refer to members of the Commonwealth and last year compared Muslim women who wear face-covering veils to “letter boxes.”

“There is no doubt that you can find things that can be made to seem offensive,” said Johnson, who claimed he had “genuinely never intended to cause hurt or pain to anybody.”

The other leaders were put on the spot, too. Corbyn, Johnson’s main rival for the prime minister’s job, faced hard questions about his party’s left-wing policies — branded reckless and terrifying by one questioner — and drew groans when he declined to say whether he supported leaving the European Union or remaining.

Labour says that if it wins the election it will negotiate a better Brexit deal with the EU, then hold a new referendum offering British voters a choice between leaving the EU on those terms or remaining.

Corbyn said he would remain neutral in such a vote because “my whole strategy has been to bring people together, however they voted in the referendum in 2016.”

Swinson faced audience hostility for her pro-EU party’s promise to cancel Brexit if it forms a government, while Sturgeon had to defend her push for a Scottish independence referendum, just five years after a vote on the issue that was billed as a once-in-a-generation event.

The election’s focus has broadened beyond Brexit this week as the parties unveiled their detailed policy platforms. Such manifestos are a British election staple and their publication is a major campaign event for each party.

The Labour Party published its wide-ranging manifesto on Thursday, setting out plans for a radical expansion of public spending and state ownership.

Corbyn said the measures in the party’s “manifesto of hope” would be paid for by increasing taxes on corporations and high earners.

Johnson has labeled Labour’s policies “ruinous.” Johnson’s Conservatives and the Scottish National Party have not yet published their own manifestos.

Plaid Cymru — Welsh for the Party of Wales — opposes Brexit, supports a new referendum on Britain’s EU membership and backs an eventual vote on Welsh independence. The party held four seats in the last Parliament.

The broadening focus of the election means even the Brexit Party, led by veteran euroskeptic Nigel Farage, published a list of policy pledges on Friday that went far beyond leaving the EU.

The party, which wants Britain to make a sharp break with the 28-nation bloc, is also calling for a “political revolution” in the U.K. It wants a written constitution, the abolition of Parliament’s unelected House of Lords, more public referendums and a cut in immigration to below 50,000 people a year, less than a quarter of Britain’s current rate.

Founded earlier this year, the Brexit Party currently has none of the 650 seats up for grabs in the House of Commons in the December vote. It is running in almost 300 seats but has withdrawn from 317 Conservative-dominated constituencies to avoid splitting the pro-Brexit vote.

Farage urged voters to give his party lawmakers in Parliament so they could pressure the government for a hard Brexit in which Britain wouldn’t remain aligned to EU rules and standards.

“Without us, there will be no genuine Brexit,” he said.