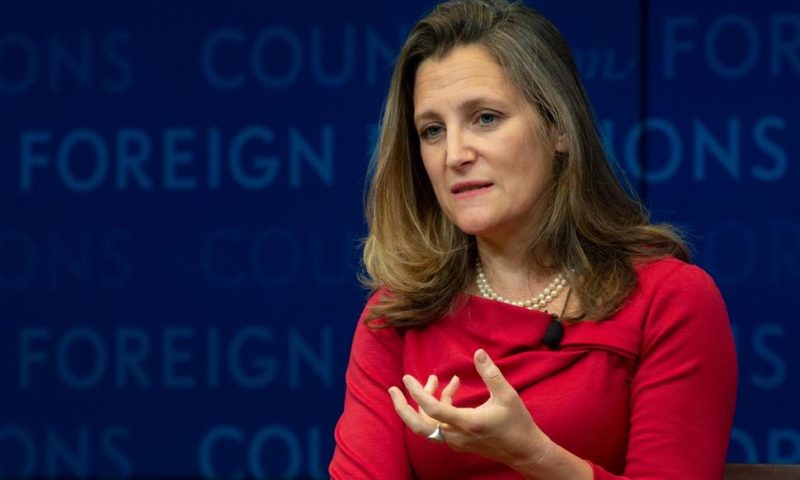 Canadian Foreign Minister Chrystia Freeland says that Canada will embark on a campaign to win the release of two citizens detained by China in apparent retaliation for the arrest of a top Chinese tech executive.

TORONTO — Canadian Foreign Minister Chrystia Freeland said Saturday that Canada will embark on a campaign to win the release of two citizens detained by China in apparent retaliation for the arrest of a top Chinese tech executive.

Freeland said on a conference call with reporters that the arrests constitute a worrying precedent that has resonated with the country’s partners.

“We’re going to keep working with a broad group of allies to raise this issue,” she said, noting that Canadian ambassadors will be reaching out to governments across the world.

Freeland said she spoke with China’s ambassador to Ottawa on Friday and made Canada’s first demand for the immediate release of ex-diplomat Michael Kovrig and entrepreneur Michael Spavor. The U.S., the U.K. and the EU also issued statements in support of Canada.

Meng Wanzhou, chief financial officer of Chinese telecommunications giant Huawei, was arrested while changing planes in Vancouver on Dec. 1 at the request of the United States, which wants her extradited to face charges that she committed fraud by misleading banks about the company’s business dealings in Iran.

Nine days later, the Chinese detained Kovrig and Spavor on vague allegations of “engaging in activities that endanger the national security” of China.

Freeland’s declarations mark a tougher tone from Canadian officials. Prime Minister Justin Trudeau has been criticized by the opposition for his largely muted response and for not phoning his Chinese counterpart.

Freeland said that that Canada is honoring its extradition treaty with the United States and emphasized that Canada has freed Meng on bail. “She has been given absolute access to due process and the independent Canadian judicial system,” Freeland said. “That is how Canada operates.”

Rob Malley, president of the nongovernmental organization that Kovrig worked for, the International Crisis Group, said the Kovrig case should concern anyone who engages with China.

“If China can arrest & detain someone, deny access to a lawyer, provide no justification — then why would a member of the business community, or an academic, feel safe travelling there?” Malley tweeted.

On Friday, the U.S. State Department reiterated a call for the Canadians’ release and British Foreign Secretary Jeremy Hunt said in a statement the U.K. is confident that Canada is respecting its extradition treaty with the U.S. and said he is “deeply concerned” that China may have detained the two Canadians for political reasons. The EU, meanwhile, issued a statement saying that the “declared motive” for their detention “raises concerns about legitimate research and business practices in China.”

The show of support from allies is significant for Canada, which has felt relatively isolated in recent months. In August, Saudi Arabia expelled Canada’s ambassador to the kingdom and withdrew its own ambassador after Canada’s foreign ministry tweeted support for an arrested Saudi activist.

The Saudis also sold Canadian investments and ordered their citizens studying in Canada to leave. No country, including the U.S., spoke out publicly in support of Canada.

Report on new-home sales would fall victim to government shutdown