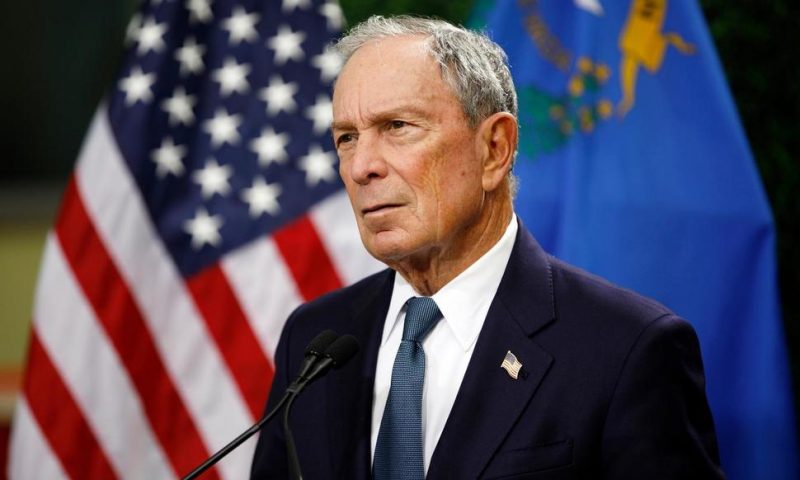 WASHINGTON — Michael Bloomberg plans to skip early voting states like Iowa and New Hampshire if he launches a presidential bid and instead focus his efforts on the crush of states that vote on Super Tuesday and beyond. It’s a strategy that acknowledges the limitations of entering the race at this late stage and the opportunities afforded by the billionaire’s vast personal wealth.

Bloomberg adviser Howard Wolfson says other candidates already have a big head start in the first four states to vote — Iowa, New Hampshire, Nevada and South Carolina — and Bloomberg needs to be realistic about where he can make up ground.

“If we run, we are confident we can win in states voting on Super Tuesday and beyond, where we will start on an even footing,” Wolfson said. Nearly a quarter of primary delegates up for grabs in the March 3 Super Tuesday contests.

Bloomberg qualified Friday to get on the ballot in Alabama, one of the Super Tuesday states. His team is also making plans to file in Arkansas, which has a Tuesday deadline.

Bloomberg’s candidacy has the potential to upend the Democratic race less than three months before primary voting begins. The billionaire businessman initially ruled out a 2020 run, but began to reconsider in recent weeks, citing concerns about the ability of the current crop of contenders to defeat President Donald Trump.

Bloomberg himself has called prominent Democrats to alert them to his likely run, and his staff is scrambling to meet fast-approaching primary filing deadlines.

Among those Bloomberg has reached out to: Tom Vilsack, the former Iowa governor who remains popular in the state. Vilsack told The Associated Press that Bloomberg called him Thursday evening and left a voicemail indicating he plans to run.

“He is in,” Vilsack said of Bloomberg’s message.

Despite the outreach to Vilsack, advisers say Bloomberg would not make a serious play for votes in Iowa and the other early states. Other candidates in the crowded field have spent months courting voters there and building campaign operations.

The early states offer just a small percentage of the delegates needed to clinch the Democratic nomination. But victories there typically give candidates crucial momentum that helps carry them into bigger states with more delegates on the line.

Bloomberg is calculating that he could build an advantage in those states now with his ability to quickly pour money into staff, television advertising and other campaign operations while other candidates are competing elsewhere.

Bill Carrick, a veteran Democratic strategist based in Los Angeles, said he doesn’t think skipping the early voting states is ever a viable strategy.

“I don’t think you can just hopscotch around the calendar to suit your own political purposes,” Carrick said. “You skip the early states, you’re going to have a difficult time. I don’t see any evidence that strategy ever works.”

Officials in Iowa and New Hampshire said they were disappointed in Bloomberg’s decision. New Hampshire Democratic Party Chair Ray Buckley said it was unfortunate that Bloomberg won’t “be tested the same way that the other Democratic candidates have been and will be.”

Bloomberg has spent the past few weeks talking with prominent Democrats about the state of the race, expressing concerns about the steadiness of former Vice President Joe Biden’s campaign and the rise of liberal Massachusetts Sen. Elizabeth Warren, according to people with knowledge of those discussions who spoke on condition of anonymity to relay details of private conversations.

Biden, campaigning in New Hampshire on Friday, welcomed Bloomberg to the race.

“Michael’s a solid guy, and let’s see where it goes,” he told reporters. “I have no problem with him getting in the race.”

Bloomberg’s moves come as the Democratic race enters a crucial phase. Biden’s front-runner status has been vigorously challenged by Warren and Vermont Sen. Bernie Sanders, who are flush with cash from small-dollar donors. But both are viewed by some Democrats as too liberal to win in a general election faceoff with Trump.

Trump told reporters Friday that Bloomberg might well spend “a lot of money” but “doesn’t have the magic to do well.” Trump suggested he’d easily beat the former mayor and fellow billionaire.

“Little Michael will fail,” Trump said at the White House, adding, “There is nobody I’d rather run against than Little Michael, that I can tell you.”

Despite a historically large field, some Democrats anxious about defeating Trump have been looking for other options. Former Attorney General Eric Holder and former Massachusetts Gov. Deval Patrick have quietly had conversations with supporters urging them to consider a run, but neither appears likely to get in the race.

Bloomberg, a Republican-turned-independent who registered as a Democrat last year, has flirted with a presidential run before but ultimately backed down, including in 2016. He endorsed Hillary Clinton in that race and, in a speech at the Democratic Party convention, pummeled Trump as a con who has oversold his business successes.

Bloomberg instead plunged his efforts and his money into gun control advocacy and climate change initiatives. He again looked seriously at a presidential bid earlier this year, traveling to early voting states and conducting extensive polling, but decided not to run in part because of Biden’s perceived strength.

Crossrail faces further delays and will cost more than £18bn