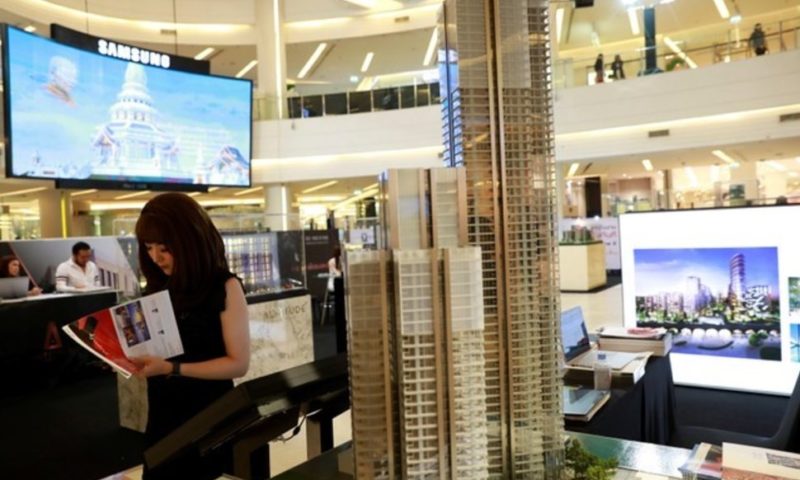 BANGKOK (Reuters) – Pimpa Panlao, 31, is struggling to pay off an 80,000 baht ($2,440) bank loan and spends a third of her income from selling women’s accessories at a Bangkok market to repay the loan.

“Business is bad and it’s very tough when you have debt,” Pimpa told Reuters, who used part of the loan to finance her business. She is not alone.

With a debt mountain of 12.17 trillion baht ($372 billion) at the end of March, the equivalent of 77.6 percent of gross domestic product, Thai households are among the biggest borrowers in Asia and they are finding it increasingly difficult to keep up with payments.

In addition, their debt pain could increase because the Thai central bank has signaled it is likely to follow other central banks around the world and raise interest rates from near record lows.

Non-performing mortgages, defined as those that have not been serviced in more than three months, were 3.39 percent of total home loans at the end of the second quarter, the highest level since the end of the global financial crisis in 2009.

Private consumption is a critical element driving the Thai economy, accounting for half of its $490 billion GDP.

Consumers continued to borrow at a robust pace in the second quarter, when overall consumer debt rose 8 percent from a year earlier. That included a 6.2 percent rise in mortgage loans and a 12.4 percent jump in car loans.

But the risk is that an increasing debt burden will drag on Southeast Asia’s second-largest economy.

The latest GDP figures for the second quarter showed the economy’s expansion slowing down from the first quarter, although the state planning agency, the National Economic and Social Development Board, kept its 2018 growth forecast unchanged at 4.2-4.7 percent.

But economists said expansion remains heavily reliant on exports as the high levels of household debt weigh on consumers. That was underlined by a central bank index that showed private consumption did not grow in June from May.

The firm manages 3.2 million distressed debt accounts worth 128 billion baht and aims to amass more this year, he said.

“We can buy any bad debt we want in the market. It’s very big, much bigger than us,” he said.

One struggling debtor, Rosukon Chakkrapongwan, fears she may lose her house as she struggles to keep up payments on a 4 million baht home loan she took up three years ago.

“It was not a problem two years ago. But this year, business is very bad as people don’t spend,” said the 44 year-old trader, who earns 30,000 baht a month selling cosmetics. More than half of that goes towards paying off her debt.

“I have failed to service my debt for three months now”.

She also fears the worst if the central bank raises interest rates.

“This would make life even more difficult. I don’t know if I can keep my house,” she said.

US consumer spending up