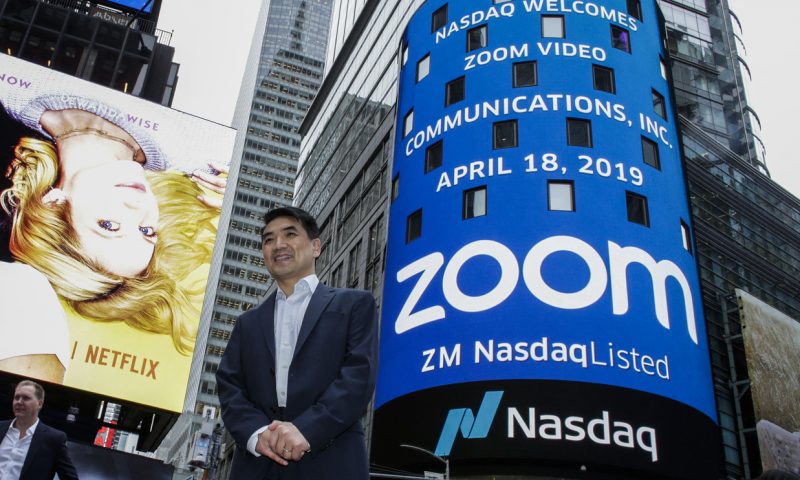 Sales grow by 169% as profits increase to quarterly record, annual revenue forecast nearly doubles and earnings are expected to grow even more

Zoom Video Communications Inc. became a household name during the pandemic, and it showed off the financial effects of its growth Tuesday — record sales and earnings, and expectations for more amid booming stock prices.

Revenue improved 169% to $328.2 million from $122 million a year ago. Analysts surveyed by FactSet had expected adjusted earnings of 9 cents a share on sales of $230.6 million.

“The COVID-19 crisis has driven higher demand for distributed, face-to-face interactions and collaboration using Zoom,” Zoom Chief Executive Eric Yuan said in a statement announcing the results. “Use cases have grown rapidly as people integrated Zoom into their work, learning, and personal lives.”

Underscoring its growth, more than 3,000 people attended a Zoom meeting with analysts late Tuesday. During the call, Yuan said, “Video is going to change everything about communication. We have a lot of opportunities ahead of us. The [total addressable market] is bigger than we expected before.”

Executives expect the astounding growth to continue: Zoom’s forecast calls for $495 million to $500 million in the fiscal second quarter, more than double the average analyst estimate. For the full year, Zoom now expects revenue of $1.78 billion to $1.8 billion, nearly double Zoom’s previous annual forecast for a maximum of $915 million in yearly sales. The company now expects full-year adjusted earnings of $1.21 a share to $1.29 a share, after previously guiding for yearly profit of 42 cents to 45 cents a share.

Shares of the videoconferencing platform, which had gleaned record usage of 300 million daily meeting participants as of late April, rose more than 4% in after-hours trading following the announcement before declining 2%. As Zoom’s use has skyrocketed, so has its market capitalization, which crossed $50 billion for the first time Friday. Shares — which sold for $36 in its 2019 initial public offering — closed higher than $200 for the first time Monday and rose 1.9% to a new all-time high of $208.08 Tuesday.

Zoom’s success has not come without safety and security lapses on its platform. Default settings allowed those who weren’t hosting a meeting to share their screens and potentially broadcast inappropriate messages. Zoom has made changes to its default setting and sought to educate users about how to safely use the platform.

“This is an enterprise tool that got a lot of consumer interest, and a lot of them didn’t know how to use it properly,” Rishi Jaluria, an analyst at D.A. Davidson, told MarketWatch in a phone interview before the results were announced. “They were crushing it before COVID-19, which has only accelerated growth.”

U.S. IPO market to reopen with a bang as the biggest deal of the year prices