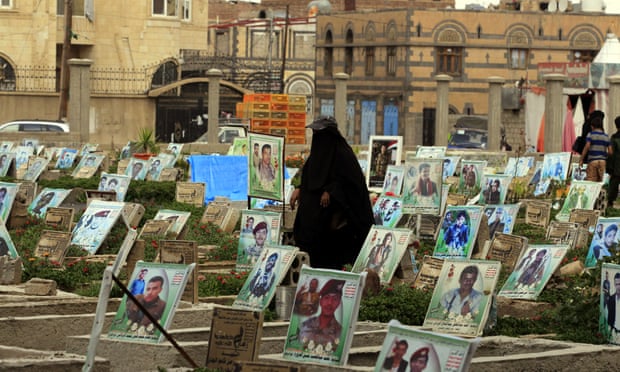 James Mattis says Saudi Arabia and its Emirati allies are ready to negotiate, with UN special envoy brokering a deal

The Trump administration has given details of a UN-brokered peace plan aimed at ending the war in Yemen, beginning with a ceasefire within 30 days and talks to be held in Sweden.

The US defence secretary, James Mattis, told an audience in Washington that Saudi Arabia and its Emirati allies were ready for a deal, and that the talks between the Saudi-led Coalition and the Houthi rebels were being arranged by the United Nations special envoy, Martin Griffiths.

The secretary of state, Mike Pompeo, issued a statement about three hours later, proposing specific terms for a ceasefire.

“The time is now for the cessation of hostilities, including missile and UAV strikes from Houthi-controlled areas into the Kingdom of Saudi Arabia and the United Arab Emirates. Subsequently, Coalition air strikes must cease in all populated areas in Yemen,” Pompeo said.

“Substantive consultations under the UN special envoy must commence this November in a third country to implement confidence-building measures to address the underlying issues of the conflict, the demilitarization of borders, and the concentration of all large weapons under international observation,” the secretary of state added.

Pompeo did not name the venue for the talks, but Mattis said it would be Sweden. The fact that the secretary of state issued a late-night statement shortly after the defence secretary, with fewer details, raised the possibility that Mattis had not coordinated his disclosures with others in the administration.

Talks planned in Geneva in September failed to take place, as Houthi representatives refused to attend without guarantees of safe passage for their wounded soldiers. The two sides have not held talks for two years.

The three-year conflict has already taken more than 10,000 lives and efforts by Saudi Arabia and the United Arab Emirates to strangle the economy in Houthi-run areas threaten to help trigger a famine, which the UN says could be the worst the world has seen for a hundred years.

“Thirty days from now, we want to see everybody around a peace table, based on a ceasefire, based on a pull back from the border,” Mattis said during an appearance at the US Institute of Peace. “That will allow the special envoy, Martin Griffiths, who is very good, who knows what he’s doing, to get them together in Sweden. That is the only way we are going to solve this.”

Mattis was being questioned about the civilian casualties from the Saudi-led coalition’s aerial bombing campaign, and US influence on Riyadh to curb the rising death toll. He replied that US planes refuelled less than 20% of coalition warplanes and argued the US and Nato air forces had set a high standard for limiting civilian casualties, suggesting that it was unfair to expect the Saudis and Emiratis to attain the same level of accuracy. But the defence secretary insisted the Saudi military chiefs were making an effort.

Since the failure to hold talks in September, Griffiths has unveiled a new peace plan built on confidence-building measures including reopening the airport in the capital, Sana’a, prisoner swaps and payment of civil service salaries.

The former head of US disaster relief assistance, Jeremy Konyndyk, suggested the administration was beginning to panic about what could happen in Yemen, and the growing congressional opposition to US backing for the Saudi coalition, especially after the murder of dissident journalist Jamal Khashoggi in the Saudi consulate in Istanbul.

“UN envoy Martin Griffiths was in DC last week and his briefings must have turned some heads within the administration. They’re moved quickly to give him some running room,” Konyndyk said in a series of tweets. “No administration wants a famine on its watch – and particularly one that would be so closely tied to the White House’s Saudi policy.”

David Miliband, chairman of the International Rescue Committee and former UK foreign secretary called on other Security Council members to back what may lead to the most significant breakthrough in four years. He said “the UK and other members of the UN Security Council should be ashamed at their silence in backing the US move”.

He told BBC Radio 4 “It is sad. Alistair Burt [the UK Middle East Minister] is a knowledgeable and thoughtful Minister. He was answering questions in parliament on Tuesday, arguing against a ceasefire so the first question for the UK is whether it will now call for a ceasefire and does it recognise reality. Worryingly for anyone concerned about British foreign policy, it looks as if the UK had no prior warning that the US was about to make these statements so the UK is in a coalition, but it does not look like anyone was talking to us about what the plans were”.

Burt told MPs on Tuesday that the UN Envoy Griffiths opposed a UN resolution on Yemen being tabled, but it is understood that Griffiths would support a resolution being tabled within weeks, around the time he is due to brief the UN.

Diplomats are reluctant to draw the connection in public, but acknowledge Saudi Arabia has been weakened by its role in the murder of the Washington Post contributor Jamal Khashoggi, and so is newly vulnerable to Western pressure to conciliate in Yemen.

The US defence secretary did not say what action the US administration would take if the warring parties did not agree a ceasefire or attend the talks. The US, along with the UK and France, supplies most of the coalition’s weaponry, but has refused to curb the flow of arms in the face of high numbers of civilian casualties and the coalition’s use of blockades and other economic measures to cut off Houthi areas, where most of the population lives, from basic supplies.