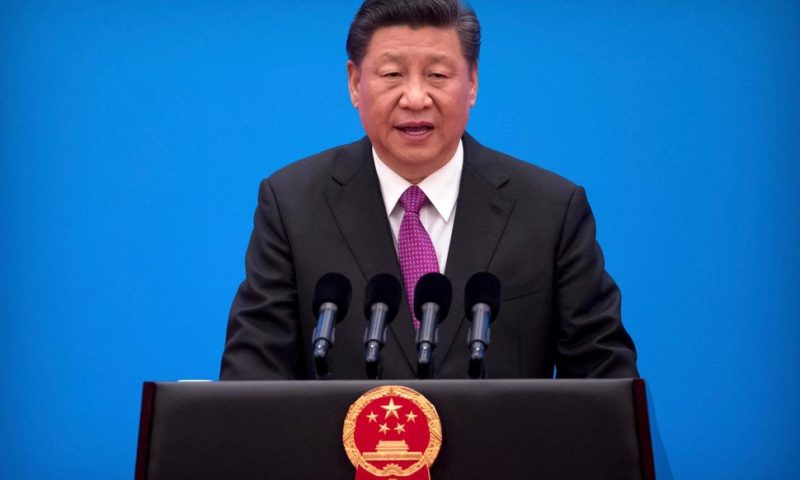 Xi spoke at a gathering of leaders to celebrate the multibillion-dollar Belt and Road Initiative, his signature foreign project. The upbeat tone of the two-day forum, at which Russian President Vladimir Putin and other leaders praised the initiative, is a setback for the Trump administration, which is trying to discourage other countries from participating.

Xi promised Friday to promote high financial, environmental and other standards in response to complaints about debt and other problems. That has the potential to heighten tensions with Washington by making the initiative more attractive to additional participants.

“We need to encourage the full participation of more countries and companies,” the Chinese president said at the event at a government conference center outside Beijing.

Xi tried to dispel complaints Belt and Road does little for developing countries that have borrowed from Beijing to build ports, railways and other facilities. Xi said his government wants to “deliver benefits to all.”

Additional agreements worth a total of $64 billion were signed during the forum, Xi said. He gave no details of what those agreements covered or who signed them.

A joint statement issued by leaders at the meeting expressed appreciation for the “important opportunities” created by Belt and Road and said it offers “potential for economic and social development.”

Participants included the presidents of the Philippines, Kenya and Egypt, prime ministers of Italy, Greece and Pakistan and other officials from Indonesia, Germany and other countries.

Other governments welcomed the initiative launched in 2013 to increase trade by building ports, railways and other infrastructure across Asia, Africa and the Middle East. But some are struggling to repay Chinese loans, which has fueled complaints about a possible “debt trap.”

Critics also complain too much of the work goes to Chinese state-owned companies and the initiative might lead to corruption and environmental damage.

Xi’s government is trying to revive momentum for Belt and Road after the number of new projects slumped last year. That followed official announcements that Chinese lenders would examine borrowers more closely and concerns by some governments about Beijing’s rising influence.

On Friday, Xi promised to embrace international financial, environmental and other standards. He pledged to work more closely with multinational entities and to open projects dominated by Chinese state-owned companies wider to private and foreign contractors.

Despite U.S. opposition, the Chinese government says the number of countries that have signed agreements to support the initiative has risen to 115 from 65.

Beijing scored a diplomatic coup in March when Italy, a member of the Group of Seven major economies, signed an agreement to support Belt and Road.

On Friday, Putin said Belt and Road fits with Moscow’s initiative to develop a common market with four of its neighbors.

Their joint statement emphasized the importance of “promoting green development” and “addressing the challenges of environmental protection and climate change.”

The Chinese leader repeated his promise to adopt “widely accepted rules and standards” and encourage Belt and Road countries to follow global standards for project development, purchasing and operations.

“We welcome the participation of multilateral and international financial institutions in Belt and Road investment and financing, and we encourage third market cooperation,” said Xi. “With involvement of multiple stake holders we can surely deliver benefits to all.”

Xi’s promises on debt, transparency and anti-corruption “will be well received by some BRI countries and outside observers,” Kelsey Broderick of Eurasia Group in a report. Others including the European Union “will wait to see actual implementation.”

Beijing is ordering Chinese state-owned companies to pay more attention to local economic development, benefits for local residents and environmental protection, the chairman of the Cabinet agency that oversees national-level government industries said Thursday, according to a transcript on the agency website.

Xi’s government also has tried to defuse tensions with Belt and Road participants by renegotiating debts or offering other concessions.

Ethiopia announced Wednesday that Beijing had forgiven interest payments owed by the northeast African nation through the end of 2018.

Outlook for the US Economy and Stock Market Brightens