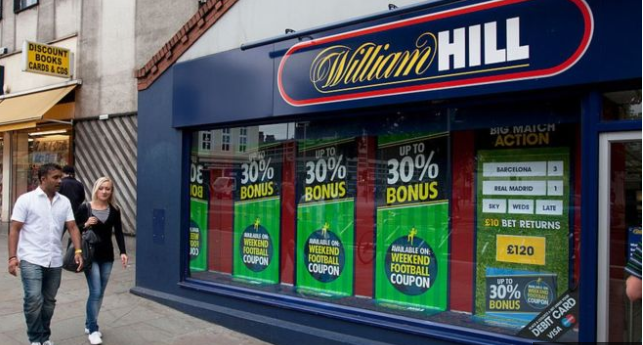 Bookmaker William Hill has said it plans to close about 700 betting shops, which could lead to 4,500 job losses.

The firm said the move followed the government’s decision in April to reduce the maximum stake on fixed-odds betting terminals to £2.

Since then, the company added, it had seen “a significant fall” in gaming machine revenues.

William Hill, which has 2,300 shops and 12,500 employees, said the closures could begin before the end of the year.

“The group will look to apply voluntary redundancy and redeployment measures extensively and will be providing support to all colleagues throughout the process,” its statement said.

Which betting shops are affected?
We don’t know yet. William Hill will not be revealing which stores will close until later this year.

However, staff at the shops were told about the decision earlier this week.

The government cut the maximum stake on fixed-odds betting terminals (FOBTs), which had previously been £100, because of widespread concern that players were able to lose large amounts of money in a short space of time.

These are electronic gaming machines that allow players to bet on the outcome of various simulated games and events, such as roulette, blackjack, bingo and horse races.

In its annual report, published in March, William Hill forecast that the government’s decision would reduce betting shop sales by up to £100m a year and could lead to the closure of up to 900 stores.

Just how addictive are these FOBTs anyway?
Well, some critics have described them as the crack cocaine of gambling.

Sources say that before the stake level was cut, a large number of William Hill stores were reliant on FOBT machines for more than 50% of their turnover.

This applied particularly to inner-city and urban areas, where shops attracted younger customers who only came for the FOBTs.

When the government reduced the stake limit, the Association of British Bookmakers warned that the move would lead to job losses in betting shops.

He urged William Hill to engage with the union immediately, so that staff could get additional support and advice during the consultation.

“The government also has a role to play and must look at what support they can offer to workers whose jobs are threatened,” he added.

“Workers don’t deserve to be the victims of the changes happening in the industry as a result of either government policy or the significant shift towards online gambling.”

A spokesperson from the Department for Digital, Culture, Media and Sport said: “By cutting the maximum FOBT stake from £100 a spin to £2, we are helping to stop extreme losses by those who can least afford them.

“The gambling industry has had over a year to make preparations for this change, including to mitigate job losses. We now expect them to provide the right support to any staff affected by planned shop closures.”

Surely there are two sides to this?
Yes. For campaigners against FOBTs, it’s something to be welcomed.

In fact, they’ve described it as the “demise of death’s doorstep betting shops”.

Adam Bradford, founder of the Safer Online Gambling Group, said: “These jobs were inevitably going to go and at least represent a decline in the misery of betting on the High Street.

“Perhaps William Hill can deploy its staff into treating addicts and supporting those who are vulnerable across their other betting outlets.”

Bookmakers were seen by many commercial landlords as their saviours – spreading out and filling the gaps left as retailer after retailer cut stores or went bust.

The truth is, bookies had a lot in common with the retailers they were replacing – most of their business was moving inexorably on-line.

The noise of a roulette ball whizzing around a virtual wheel is a familiar soundtrack to anyone who has been in a betting shop in the last ten years.

You can lose money breathtakingly quickly – I got through £60 in less than five minutes the one time I tried it for myself.

They were also considered among the most addictive and harmful forms of gambling. The decision to limit the maximum bet to £2 from £100 was considered a major victory by gambling charities.

These shop closures are unlikely to be the end of it. I’m told it is a racing certainty that the other big players – particularly Ladbrokes Coral who have over 3000 shops – will follow suit.

Biased and wrong: Facial recognition tech in the dock

Oil prices fall on US inventory data, concerns about demand