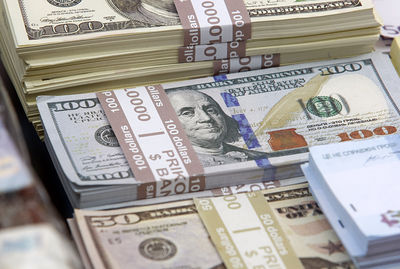 Another year of dollar strength could be a major headwind

And while stocks can still perform well during periods of dollar strength, all else equal, a more expensive greenback will likely remain a headwind for stocks in 2019, analysts and investors said.

“It would be worrisome if the dollar rally continues,” Michael DePalma, chief executive and senior portfolio manager at PhaseCapital, told MarketWatch. “It could put a nice little dent in asset prices.”

A continuation of last year’s dollar rally could be particularly painful for the large-cap firms that make up the S&P 500, as foreign sales have accounted for more than 40% of S&P 500 revenue in recent years.

There are many reasons to think the dollar rally won’t last, including a recent dovish turn by the Federal Reserve and the U.S. growing budget deficit. But Ben Laidler, chief equity strategist at HSBC argued in a recent research note that “In the relative world of FX, the USD is still best placed to strengthen in most scenarios.”

He points to a global economy that is slowing more quickly than the U.S. as a main reason to support the dollar relative to other currencies like the euro EURUSD, +0.9375% or the Japanese yen USDJPY, -0.08% while arguing that the Federal Reserve will hike rates at least once this year. That’s in contrast to market expectations, which see a two-in-three chance that the fed-funds rate won’t be moved in 2019, according to CME Group.

“There is a big disconnect between what the Fed aspires to do this year and what the market expects it to do,” George Mateyo, chief investment officer at Key Private Bank, told MarketWatch. “We think the Fed will raise one more time, whereas the market predicts no hikes.”

“We came into this year thinking that the dollar was overvalued,” but given what he predicts as the growing gap between U.S. interest rates and other developed markets, this overvaluation “could persist all year,” Mateyo said.

Analysts emphasized that when talking about the relationship between a stronger dollar and the stock market, much depends on the reason why the dollar is rising.

Laidler expects the dollar to strengthen in part because he expects the U.S. economy to outperform expectations. As a result, he predicts a stronger dollar won’t be a barrier to the S&P 500 gaining 17% in 2019, the upper range of his forecast.

But if dollar strength is driven by an sharp slowdown in global growth, wherein investors flee to the dollar as a haven, a rising dollar would remain one of many headwinds restraining valuations in 2019.