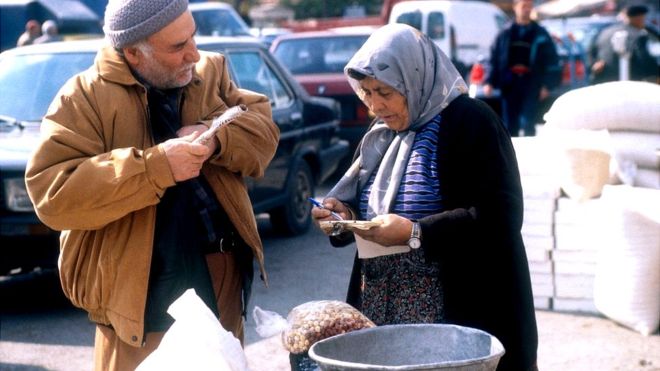 Financial markets in Turkey have been volatile in the run-up to local elections on Monday.

The currency, the lira, dropped 5% in the course of a single day, while the stock market lost 10% of its value in just over a week.

The economy is going through a very difficult patch, with a recession accompanied by high inflation.

Turkish President Recep Tayyip Erdogan has suggested the West is behind the financial turbulence.

How bad is Turkey’s economic situation?

It has certainly taken a marked turn for the worse, after a long period of mostly strong growth under President Erdogan.

He took office in 2003 (as prime minister in the first instance, then later as president) in the aftermath of a major financial crisis that led to a bailout from the International Monetary Fund.

The economy subsequently saw healthy growth, apart from 2009, when there was a global recession.

In the 15 years from when he took power, the economy more than doubled in size, at an average annual rate of 5.6%.

Now, however, the economy has shrunk in both the third and fourth quarters of last year. That is a recession as the term is most often defined.

Economic activity in the final three months of 2018 was 3% lower than a year earlier.

Unemployment is also a persistent and worsening problem. By December last year, 4.3 million people wanted a job and didn’t have one, giving an unemployment rate of 13.5%.

Is a recovery on the cards?

There may well be a recovery of sorts, but it would be quite a surprise if it’s as strong as the country’s recent performance.

For the next four years, the International Monetary Fund is predicting a return to growth. But it’s not expecting much more than 2.5%, and less in some years.

For an emerging economy where the potential for growth should be relatively good, that’s not particularly impressive.

Turkey also has a serious inflation problem. Consumer prices in February were very nearly 20% higher than a year earlier. The figure was more than 25% in October.

Central banks generally deal with an inflation problem by raising interest rates, which makes it more expensive for firms and households to borrow, so they spend less, reducing the pressures that tend to push prices up.

The Turkish central bank did raise rates very sharply last year, with its main rate ending up at an eye-watering 24%. But Mr Erdogan did not approve.

What are the president’s views on interest rates and inflation?

Mr Erdogan’s views could hardly be more unorthodox – and that is seen as a problem in the financial markets.

He has called repeatedly for lower interest rates and has restated that view in the last few days.

He noted that inflation had come down from its highs (which is true). But he said the main problem was the level of interest rates.

He said: “Inflation will further decrease with the lowering of interest rates.”

That is exactly the opposite of the view held in central banks, financial markets and among academic economists. It leaves doubts in the minds of investors about whether the central bank is really independent, although so far, it has not responded to the president’s calls for lower rates.

Is the currency under pressure?

Turkey has a related problem of bouts of sharp currency decline, an issue that has resurfaced in the last few week. It aggravates an inflation problem by making imported goods more expensive.

Higher interest rates can help stabilise a currency. Such a move means that investors can earn better returns in the country’s currency, so they are more inclined to buy it, thus pushing its value up – or least dissipating some of the pressure for the currency to drop.

So what steps have President Erdogan and the Turkish authorities taken?

For one thing, he has blamed outsiders: “All these are attempts by the West, particularly America, to corner Turkey.”

The banking regulator has launched an investigation into the US firm JP Morgan over a report which was seen as undermining the currency.

“We should discipline all market speculators,” Mr Erdogan was quoted as saying.

There was also a surge in the cost of borrowing lira in the financial markets. Some reports said that Turkish banks had been told to withhold lira funds, which could have been used to speculate against the currency.

The government has also been operating markets that offer a limited range of foods at lower prices.

Will these measures help?

The food markets may help some hard-pressed families, but it is not going to yield a durable solution to Turkey’s inflation problem.

As for the steps to stabilise the currency, there is a great deal of scepticism.

Dennis Shen of the credit rating group Scope said: “Such tactics to force lira stability and restrict selling of the lira may reduce speculative pressures to an extent in the short run, but will make lira less attractive longer-term, cutting foreign direct investment and external portfolio and debt flows into Turkey.”

Lights out for Earth Hour