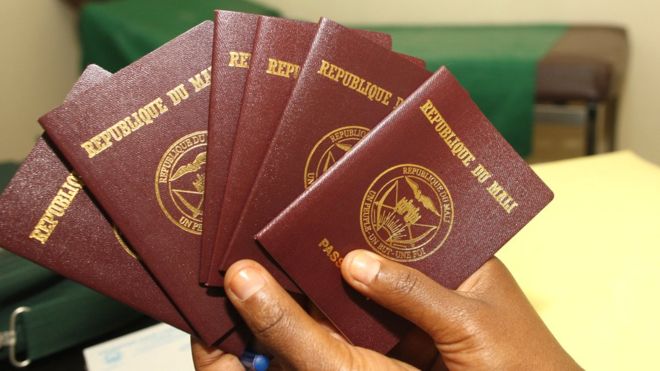 Africa’s richest man Aliko Dangote has said he needs 38 visas to travel within the continent on his Nigerian passport. Many European nationals, meanwhile, waltz into most Africans countries visa-free.

African nations were supposed to scrap visa requirements for all African citizens by 2018.

It was a key part of the African Union (AU) “vision and roadmap for the next 50 years” that was adopted by all members states in 2013.

But to date, the Seychelles is the only nation where visa-free travel is open to all Africans – as well as to citizens of every nation – as it always has been.

A recent AU report found that Africans can travel without a visa to just 22% of other African countries.

It is a sensitive topic, provoking xenophobic attitudes in some of Africa’s wealthier nations despite policymakers from Cape to Cairo insisting that the free movement of people is key for economic transformation.

“Our leaders seem to go to ridiculous lengths to preserve and protect the colonial borders,” says South African travel blogger Katchie Nzama, who has visited 35 of Africa’s 55 countries.

The AU may want a borderless continent where its 1.2 billion people can move freely between nations, similar to the European Union, but it seems there is no shortage of obstacles.

Whether it is immigration officials in Burkina Faso charging an arbitrary $200 (£155) for a visa on arrival, or Tanzania arresting and deporting other East Africans who enter illegally, or Tunisia refusing visas to stranded African passengers after a cancelled flight, intra-African travel is fraught with suspicion.

South Africa appears to be the most visible representative of the continent’s visa double standard, remaining largely closed to other Africans but more welcoming to the wider world.

Citizens of only 15 African nations can travel to South Africa without a visa, yet holders of 28 different European passports can enter the country freely. 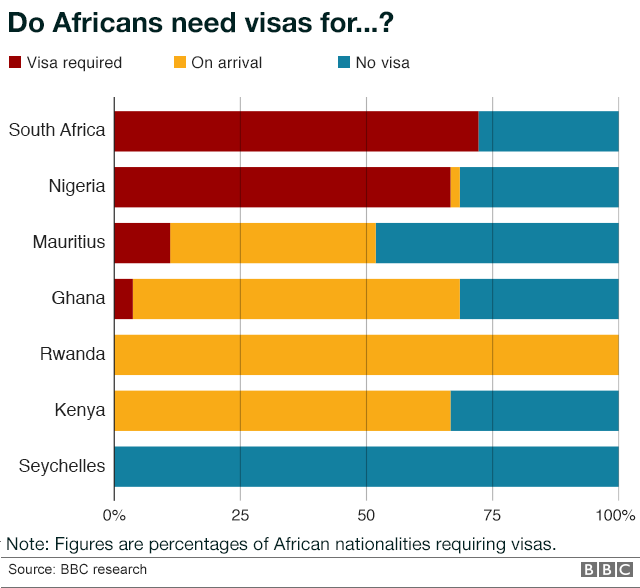 “This is an unfair assertion – visa-waiver agreements are premised on reciprocity and we are finalising such with a number of African countries,” he told the BBC.

Just how that reciprocity is applied is unclear.

Kenya, for example, gives South African citizens a visa on arrival for free. But Kenyans must apply for a visa, then pay a service fee and wait for at least five working days before travelling to South Africa.

In 2015, two years after the African Union asked members to commit to abolishing visa requirements for all Africans by 2018, South Africa did the opposite and announced stricter regulations that were widely criticised.

Hit by a recession and a drop in tourist numbers, the country caved in and recently announced that it was relaxing travel rules in the hope of reviving its struggling economy.

Namibia, Mauritius, Ghana, Rwanda, Benin and Kenya have all loosened travel restrictions for other African nationals, and now either grant a visa on arrival or allow for visits of up to 90 days with just a passport.

But citizens of African countriesstill need a visa to travel to more than half of the continent’s 54 countries, protecting borders drawn up by European colonisers more than a century ago.

“Somebody like me, despite the size of our group, I need 38 visas to move around Africa,” complained Nigerian billionaire Aliko Dangote in an interview in 2016.

He is reportedly one of the first in line to receive the African passport which was launched in 2016. The travel document is supposed to eventually replace individual nations’ passports, but is currently only available to some heads of state, senior diplomats and top AU officials.

It is easy enough to travel within regional blocs such as the East African Community, the Economic Community of West African States, the Southern African Development Community, the Maghreb, as well as the Central African Economic and Monetary Community. But it is rarely possible to travel from one region to another without restrictions.

Another impediment to African travel is that there are very few commercial flights from one region to another and when they do exist, they are prohibitively expensive.

“Flying from Kenya to Namibia is the same price as flying to Thailand, and the cost to Dubai from Nairobi is way cheaper than flying to Morocco,” says Kenyan travel blogger Winnie Rioba.

And this is on top of the visa fees.

Ms Rioba was charged $90 for a visa fir Djibouti, more than the $75 she paid for a Schengen visa, which gave her access to 26 European states.

“I’ve spent more money applying for visas than transport costs in my travels across the continent,” agrees Ms Nzama.

“This is not just money paid to embassies. It’s the time and money wasted going back and forth to embassies, and preparing the required documents, which in most cases I felt were not necessary,” the South African travel blogger says.

To help her fellow Nigerians find their way through the maze of requirements, entrepreneur Funmi Oyatogun created a colour-coded map outlining which African countries were easiest to travel to: 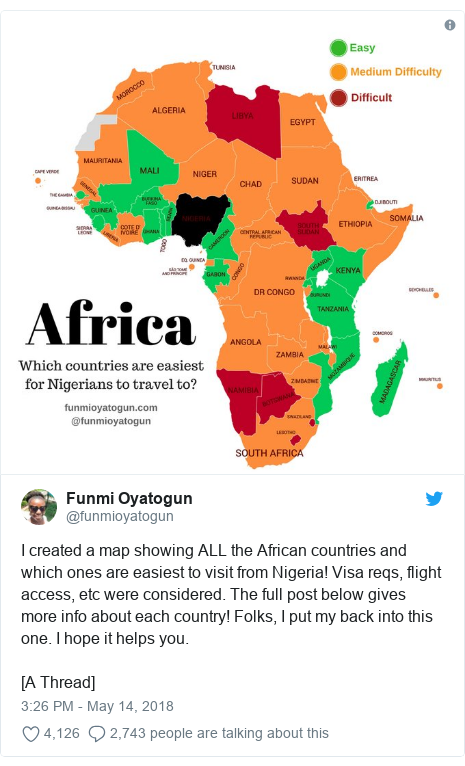 “Our focus is to simplify travel for Africans across Africa,” she says of her start-up TVP Adventures.

She believes these efforts are a necessary part of what she calls the “African travel spring”.

“We are breaking through the barriers that made it difficult in the past – lack of information, poor flight connections, and incorrect perceptions of other African countries.”

There is widespread support for scrapping the visa requirements for Africans travelling within the continent.

But as the 2018 deadline slips by, few believe it is likely to happen soon.

And while we wait, it might remain more attractive to leave the continent.

“How will I convince an African traveller to go with me to Angola if the trip will cost as much as travel to five countries in Europe?” asks Ms Rioba.

“They give you visas as if it is a favour.”

Germany Denies It Plans to Fly Migrants Back to Italy