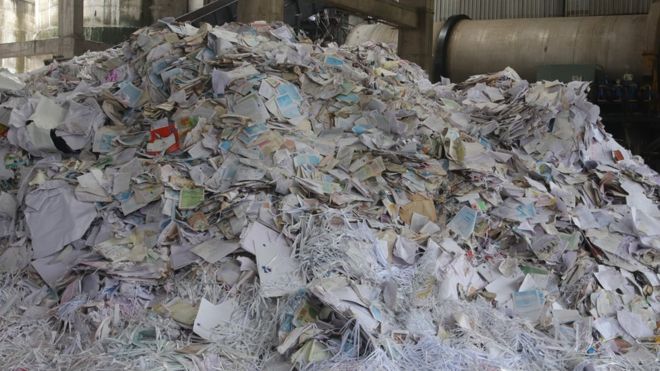 Ever wondered what happens to the household waste paper thrown out for recycling in Europe and the US?

Since China – once the world’s major destination for paper recycling – introduced new restrictions on waste paper imports at the beginning of last year, a significant proportion is now being sent to India where it’s reprocessed.

At the NR Agarwal recycling plant in western Gujarat state, huge mountains of waste paper are piled up almost to the ceiling.

The plant, in an industrial estate in the city of Vapi, is one of India’s biggest – and the scale of the operation here is striking.

Workers use bulldozers to break open massive bales of waste paper, and teams of women in brightly coloured saris sort the paper into different types.

In one pile the front page of an edition of the Sunday Telegraph is clearly visible. In another I spot the green masthead of an English local paper – the Forest of Dean and Wye Valley Review.

“Most of our imports are from the UK and the USA,” says Ashok Bansal, the company’s executive director.

He shows us how the paper is sorted and loaded onto a conveyor belt to be pulped. The resulting bluish mass is then treated with chemicals and coated onto huge, humming rollers which churn out large sheets of clean white paper ready to be used again.

As we speak, a lorry arrives carrying a new load of scrap paper from Belgium.

Every day now more and more trucks are roaring along the road to the factory from the nearby docks, and the paper mountains in Mr Bansal’s factory are growing.

The reason for the resurgence in paper reprocessing is that China – once the destination for more than half the world’s recyclable scrap paper, metal and plastic – has imposed new restrictions on waste imports. The authorities said they were taking action to protect public health and the environment.

The decision – announced on 1 January 2018 – left Western countries scrambling to find a new home for their recyclable waste.

Many were facing the choice of either dumping waste in landfill sites, or burning it, until Indian reprocessing plants like Mr Bansal’s stepped into the breach.

During the first half of last year, there was a 200% rise in waste paper exports from the European Union to India, according to the Confederation of European Paper Industries. And from the US exports rose by more than 100% between January and October last year compared to the same period in 2017, according to the International Scrap Recycling Institute (ISRI).

“We are now using bigger ships to export [to India] because the volumes of recyclable paper going out is significantly up,” says Ranjit Baxi, chairman of J and H Sales, a major recycling firm in the UK.

“And we think India will continue to grow as a market for us.”

For the Indian companies it’s a win-win situation.

“India is a raw material scarce country,” says Mr Bansal. “We don’t have lots of trees and jungles to convert wood into pulp. We are mostly dependent on waste paper and that demand can be provided by the Western world.”

At the bustling paper market in Old Delhi, India’s need for paper goods is clear to see.

The market sells everything from novels and exercise books to paper for technical design and charts.

Shoppers and traders jostle for space on the narrow pavements.

“The crowds here are getting bigger all the time,” says bookseller Shabir Hussein. “Sometimes I just can’t cope with the demand.”

Much of the paper made in India is used to make books and school books for a rapidly growing population, and to make cardboard boxes and other types of packaging for the expanding manufacturing sector.

But a significant amount also ends up as newsprint.

India might be known around the world as a centre of the high-tech industry, but it’s also a country where the print media is booming.

Annual newspaper and magazine sales have soared from 40 million in 2006 to nearly 63 million in 2016, according to India’s Audit Bureau Circulation.

Experts say the main reason India is bucking the global trend is that although access to the internet via smartphones, laptops and tablets is widespread, many Indians still prefer to have their news delivered to their homes every morning in the form of a daily newspaper.

The influx of waste paper imports from abroad has helped an industry in India that until last year was in serious decline due to the scarcity and cost of waste paper to recycle.

“In past years more than one-quarter of paper mills were forced to shut down because of expensive waste paper prices,” says entrepreneur Aman Sethi.

“Now with this surge in imports the prices have come down and they are reopening. “

For the local economy that means new jobs, not just in the recycling plants but also at the ports and in the transport companies ferrying the paper to and from the plants.

And the trend looks set to continue, for now at least.

Domestic recycling only produces 30% of that amount, and recycling levels are only half the global average. So the demand for waste paper from abroad is likely to remain strong.

But the challenge facing Indian importers is how to enforce more stringent rules about the kind of waste they are prepared to accept.

In the first few months of last year several consignments of paper were unusable because they contained plastic, and paper mills even blacklisted some UK and US suppliers.

“Anybody who intends to export waste paper to India will have to comply with our strict regulations,” said Sujeet Samaddar, from Niti Aayog, India’s top planning body that is now formulating a national recycling policy.

“It’s not as if the floodgates will open for any old paper to come into India.”