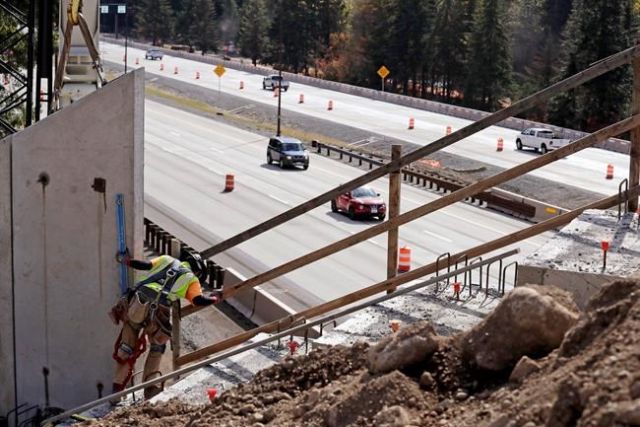 Before descending the Cascade Mountains on its final stretch to Seattle, Interstate 90 cuts through a mountain pass of old growth forests and wetlands.

For countless wildlife species, the busy highway is a border, constraining their movements and posing a fatal risk should they dare to cross it.

“Everything from an elk down to a small salamander, they need to move to find food, to find mates, to find new places to live as their populations expand or just when conditions change, like a fire breaks out,” said Jen Watkins of Conservation Northwest.

Soon, animals will have a safer option for crossing the road: They’ll be able to go above it.

Washington state is finishing work on its largest wildlife bridge. The 35-foot-tall, 66-foot-wide structure emerges from the forest and forms two arches above the highway, one for each direction of traffic.

Fencing and landscaping will be installed to guide animals across the bridge, and 8-foot walls will block car noise.

At least one animal has already used it. Washington’s Transportation Department tweeted last week that a wildlife camera captured video of a coyote scampering over I-90 on the new structure. “Excited to see what other species cross!” the agency wrote.

Scientists pinpointed the area as part of a natural migration route from the Cascades to Keechelus Lake, said Meagan Lott, spokeswoman for the project. Animals, especially elk, move to the lower lands as the season change and the mountains get colder and snowier.

“Providing habitat reconnection will prevent some of the wildlife from accessing I-90 and keep drivers safe,” she said.

Is US military cloud safe from Russia? Fears over sensitive data

Digging in for wall fight