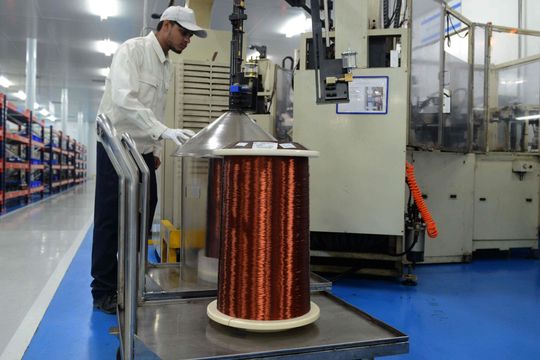 Copper prices scored their largest monthly gain in over four years on Friday, as traders bet that a recovery by the pandemic-hit global economy will lead to a significant rise in demand for the industrial metal.

“Copper prices have increased due to actual and anticipated demand, stemming from expectations of a strong post-coronavirus recovery, as well as concerns regarding supply shortages and a weakening U.S. dollar,” said Jeff Klearman, portfolio manager at exchange-traded fund issuer GraniteShares, which offers the GraniteShares Bloomberg Commodity Broad Strategy No K-1 ETF COMB, -1.35%.

Chinese demand has significantly increased, with the nation accounting for 55% of the world’s copper consumption, said Klearman. At the same time, however, London Metal Exchange inventory levels have fallen to 15-year lows and production in top producer Peru has fallen, “creating a forecasted large copper ‘deficit’ this year and perhaps over the next few years.”

In a report released on Feb. 22, the International Copper Study Group said that the preliminary world refined copper balance in the first 11 months of last year indicated an apparent deficit of about 590,000 metric tons for 2020, with the group citing “strong Chinese apparent usage.”

Darwei Kung, portfolio manager and head of commodities at DWS Group, said copper supply has been “steady, growing at around 2% to 3% per annum,” and DWS Group has not seen any news on copper mining companies announcing new capital spending that would increase expected supply beyond the gradual increase.

Strong industrial activity in China since March of last year is likely to continue, though outside of the country, current industrial activities are still muted due to COVID-19, he said. Still, the successful development of vaccines and “relatively effective delivery of vaccines so far has provided optimism for investors.”

With President Joe Biden’s stated policy to promote alternative fuel and renewable energy, many investors have priced in higher expected demand for copper, said Kung. Copper is used in renewable energy systems. Meanwhile, infrastructure investments from the U.S. and other countries will also impact the price of the metal, but “disappointment in realized infrastructure spending will be a downside risk.”

For now, copper has pulled back from its recent highs, due to “concerns surrounding rising interest rates, but other conditions are still in place” to continue to support prices,” said Klearman.

Nasdaq’s rally comes in the face of bearish market breadth