This week, the equities market gave back a modest proportion of the previous week’s stellar gains as investors try to gauge the scale of the economic slowdown. The major stock indexes saw moderate retracements. The Dow Jones Industrial Average (DJIA) slid back 0.01% and its total stock market index receded 0.97%. The S&P 500 Index declined 0.69% while the Nasdaq Stock Market Composite dropped 1.57%. The NYSE Composite inched down 0.28%, while the CBOE Volatility Index (VIX) rose 2.66%. The increase in the volatility metric generally indicates a heightened perceived risk among investors, although the current VIX value of 23.12 is still significantly below the 30-benchmark level indicating large volatility.

In this week’s trading, growth stocks underperformed value-oriented shares as the latter was supported by gains in the consumer staples sector. On the other hand, the energy sector underperformed due to European oil and natural gas inventories reaching near-peak levels. A brief sell-off on Tuesday was sparked by dispelled reports of a Russian missile strike on Polish territory. For much of the week, trading volumes remained subdued. Investors remained focused on earnings reports from prominent retailers and what they may indicate about a possible economic slowdown.

The U.S. Treasury yield curve inverted further during the week, driving the inversion level in the two-year/10-year curve segment to its deepest level in more than four decades. This is of some concern since this is typically an indicator of a coming recession, although this prognosis remains far from conclusive. James Bullard, President of the Federal Reserve Bank of St. Louis, announced that the Fed’s terminal policy should reach a minimum level of 5% and may need to reach as high as 7% for the central bank to achieve its inflation objectives. This news caused short-term U.S. Treasuries to reprice to higher levels. Meanwhile, “dip buying” in longer maturities helped push long-end yields downward since bond prices and yields are negatively correlated.

The labor market remains resilient although the manufacturing sector showed slower growth. In October, industrial production unexpectedly slowed as it was weighed down by weakness in the energy and materials sector. A gauge of manufacturing activity in the Mid-Atlantic region also plummeted to its lowest level since May 2020. Another round of massive layoffs was announced by Amazon.com in the form of a 10,000-strong job cut. The jobless claims over the previous week remained muted, however. Some 222,000 workers filed for unemployment benefits, still within the 214,000 to 226,000 tight range of jobless claims since late September.

While there were reports of flagging discretionary spending impacting some retailers, others reported better-than-expected results that offset concerns and reflected a more positive picture. The Commerce Department reported on Wednesday that retail sales excluding the volatile auto segment rose 1.3% in October, the biggest gain since May and well above consensus expectations.

Gold and silver have seen impressive rallies since the start of November. Silver prices rose 19% in the last three weeks as they briefly pushed above $22 per ounce, and gold prices rallied almost 11% to within proximity of $1,800 per ounce. While both precious metals maintain most of their gains heading into the weekend, they are still well off their highs and continue to test important support levels at $1,750 and $21 for gold and silver, respectively. While there appears a new impetus to the rise in precious metals prices, one requisite remains missing. Still sitting on the sidelines are the long-term investors in gold-backed exchange-traded funds (ETFs). Analysts note that rallies in gold and silver will remain unsustainable until these investors rejoin the market. This prospect may not occur for some time, as long as the Federal Reserve maintains its aggressive monetary policy stance.

The week was replete with both negative and positive disruptive events, including the prospect of World War III, a drone missile attack on a tanker in the Middle East, and market optimism from improving inflation data suddenly cut short by a protracted coronavirus outlook in China. Concerning the covid outbreak, the situation in that country has become so dire that Chinese retailers have reportedly asked Saudi Arabia to cut already nominated December volumes, simultaneously withdrawing on other buying. China’s re-emergence was a critical consideration of the recent upswing in prices. The latest developments have caused ICE Brent prices to slip below $90 per barrel again, as would have been expected given the recent events. For the longer-term outlook, the U.S. is expected to ban fossil fuel heavy-duty cars by 2040. U.S. Energy Secretary Jennifer Granholm, speaking at the COP27 climate summit in Egypt, stated that the White House intends to sell only zero-emissions medium- and heavy-duty vehicles including buses, delivery vehicles, and trucks, by the end of the next decade.

For the report week beginning Wednesday, November 9, and ending Wednesday, November 16, 2022, the Henry Hub spot price rose $2.29, from $3.45 per million British thermal units (MMBtu) at the start of the week, to $5.74/MMBtu at the end of the week. The price of the December 2022 NYMEX contract increased by $0.335, from $5.865/MMBtu to $6.200/MMBtu. The price of the 12-month strip averaging December 2022 through November 2023 futures contracts rose $0.203 to $5.349/MMBtu. International natural gas futures price movements were mixed this report week. Weekly average futures prices for liquefied natural gas (LNG) cargoes in East Asia decreased $0.85 to a weekly average of $27.06/MMBtu. Natural gas futures for delivery at the Title Transfer Facility (TTF) in the Netherlands, the most liquid natural gas market in Europe, increased by $0.15 to a weekly average of $34.10/MMBtu

European stocks consolidated as the pan-European STOXX Europe 600 Index ended mostly higher in local currency terms. The region’s major stock indexes solidified their positions, with Germany’s DAX Index rising 1.46%, Italy’s FTSE MIB Index advancing 0.90%, and France’s CAC 40 Index ascending 0.76%. UK’s FTSE 100 Index gained 0.92%. In his Autumn Statement, UK Finance Minister Jeremy Hunt announced a round of tax increases, spending cuts, and new fiscal rules, intent on repairing the public finances and restoring Britain’s credibility in international markets. The government will raise taxes by GBP 25 billion and cut spending by GBP 30 billion by 2027-2028 to plug the fiscal hole of GBP 55 billion. The greater portion of the cutdown in public spending is scheduled for implementation after the next general election in 2024. Inflation in the UK accelerated and hit a 41-year high of 11.1% in October, more than was expected and higher than the 10.1% inflation rate registered in September. Its primary drivers were sharp increases in energy bills and food prices.

Japan’s stocks fell over the past week. The Nikkei 225 Index declined by 1.29% while the broader TOPIX Index slid by 0.54%. The rate of core consumer price inflation ascended to a 40-year high, further exerting pressure on the Bank of Japan (BoJ) which remains committed to its ultra-loose monetary policy stance. For the third quarter of the year, the Japanese economy unexpectedly contracted, weighing down investor sentiment. The yield on the 10-year Japanese government bond rose to 0.24% from 0.23% at the end of the week before. The yen weakened slightly to approximately JPY 139.8 against the U.S. dollar, compared to the prior week’s rate of about JPY 138.8 to the greenback. Core consumer prices for October rose at their fastest rate in four decades. Excluding fresh food, consumer inflation grew 3.6% year-to-year, higher than the BoJ’s target for the seventh consecutive month.

Stocks in mainland China rose modestly over the week. The Shanghai Composite Index gained 0.32% while Hong Kong’s Hang Seng Index outperformed with a rise of 3.85%. Investor sentiment struck a balance between optimism about the easing COVID restrictions and concerns over rising cases. New cases of coronavirus infections averaged 16,000 by the end of the week, with a seven-month high of over 25.000 on Thursday alone. Although the breakout was widespread, China’s National Health Commission announced that it was ending mass testing in districts not at risk of community transmission. Furthermore, plans to create new COVID-focused treatment centers were announced by the Commission. This is evidence that the government was gradually retreating from its “zero-COVID” policy, contrary to official statements. The strict official policy, together with the troubled housing sector, appeared to impact negatively on the consumer as evident in Monday’s October retail sales report. Data showed sharp year-on-year declines in almost all categories of retail sales (for instance, sales of home appliances plunged by over 14%). However, investors’ hopes were enhanced by recently announced support measures for the property sector. Officials unveiled 16 new programs to shore up the property markets, including loan extensions to both homebuyers and developers.

Among the important economic data scheduled for release in the coming week are building permits, durable goods orders, and the Markit PMI. 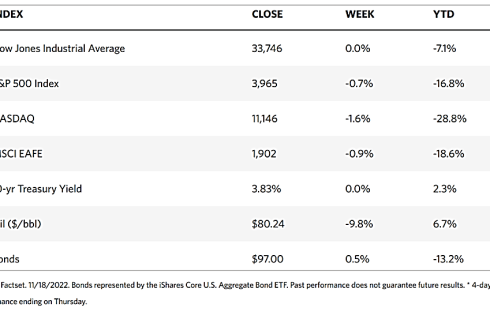