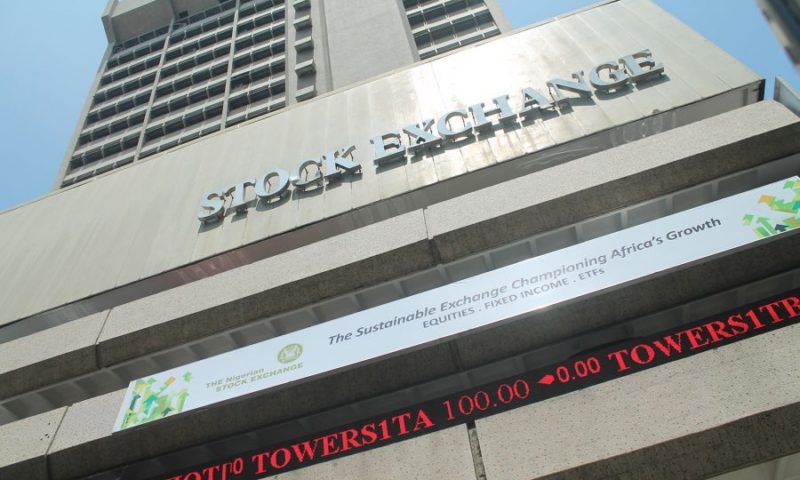 The Nigerian equities market recorded a positive performance last week as it recovered part of the losses suffered the preceding week.

The development followed renewed buy interest in bellwether stocks, which led to the Nigerian Stock Exchange All-Share Index (NSE ASI) rising 0.23 per cent to close at 32,200.21, compared to a decline of 2.38 per cent the previous week.

In spite of the corporate earnings for the nine months ended December 31, 2018, that showed relative improvement, the market had closed in the bear territory two weeks ago.

However, a renewed buy Interest in bellwethers such as Nestle Nigeria Plc, Seplat and Nigerian Breweries Plc reversed the negative trend. While the NSE ASI rose 0.23 per cent, market capitalisation added N27.5 billion to close at N11.756 trillion.

Similarly, all other indices finished higher with the exception of the NSE Banking, NSE Insurance, NSE Industrial Goods and NSE Pension Indices that finished lower by 0.47 per cent, 1.90 per cent, 3.81 per cent and 0.31 per cent respectively.

But analysts at Cordros Capital Limited noted that despite recent gains, outlook for the market remained negative in the short to medium term, amidst political concerns surrounding the 2019 elections, and absence of a positive market trigger. “However, positive macroeconomic fundamentals remain supportive of recovery in the long term,” they added.

In the United States (US), the midterm elections impacted positively on the markets.

According to Afrinvest (W.A), the outcome of the elections triggered a global equities rally as the Democratic Party won control of the House of Representatives for the first time in eight years, although markets later pared gains towards the end of the week.

The implication of the election outcome was that the House would exercise more oversight over President Trump’s decisions, which could potentially result in some measure of calm, especially as it relates to global relations.

However, this could also mean further divisiveness and conflict that would eventually result in slow paced reforms and decision making, which are a bad signal for investors.

The performance of developed markets was largely bullish, even as sell offs increased at the end of the week, due to fears of a further interest rate hike by the US Federal Reserves. In the US , the S&P 500 closed higher by 3.1 per cent and the Nasdaq Composite was up by 2.4 per cent However, Hang Seng was the only index that recorded a decline (-3.7per cent) because of the expected FED interest rate hike and a slowing economy.

Across markets in BRICS, only two of five indices were up. Brazil’s Ibovespa had the worst return at -3.2 per cent , followed by China with a decline of 2.9 per cent . In view of the ongoing trade war with the US, China is offering tax breaks and more financing to support private sector companies affected by the trade tensions, as well as a slowing economy. Similarly, South Africa’s FTSE/JSE All-Share was down by 1.9 per cent. On the other hand, Russia RTS and India’s BSE Sens Indices recorded positive performances, increasing 0.5 per cent W-o-W respectively.

In Africa, there was a bullish performance as four of six markets tracked recorded gains. Egypt’s EGX30 had the best return with a gain of 4.0 per cent W-o-W, followed by Morocco’s Casablanca MASI which increased 1.4 per cent while Mauritius SEMDEX increased by 0.4 per cent. Ghana’s GSE Composite and Kenya NSE-20 declined by 1.1 per cent and 0.4 per cent respectively.

In Asia and Middle East, there was a bearish performance as four of the five markets recorded negative returns due to expectations of an interest rate hike by the US Fed. UAE ADX General Index was worst hit, sliding 2.1 per cent, trailed by Turkey’s BIST 100 Index which declined 1.2 per cent while Thailand SET and Qatar DSM 20 Indices declined 0.8 per cent apiece. On the positive side, Saudi Arabia recorded an increase of 1.8 per cent.

Also traded during the week were a total of 4,065 units of Exchange Traded Products (ETPs) valued at N17,357.55 executed in 1 deal compared with a total of 15,168 units valued at N216.251 million that was transacted two weeks ago in nine deals.

The price movement chart showed 27 equities appreciated in, higher than 18 in the previous week, while 39 equities depreciated in price, lower than 42 of the previous week. UAC of Nigeria Plc and NPF Microfinance Bank Plc led the price gainers with 11.1 per cent apiece. Presco Plc trailed with 10.6 per cent, just as NAHCO Plc and John Holt Plc went up by 10 each.

MCNichols Plc and Veritas Kapital Assurance Plc and Nestle Nigeria Plc garnered 9.7 per cent, 8.0 per cent and 7.4 per cent in that order, while Seplat and Diamond Bank Plc chalked up 6.9 per cent and 6.6 per cent respectively.