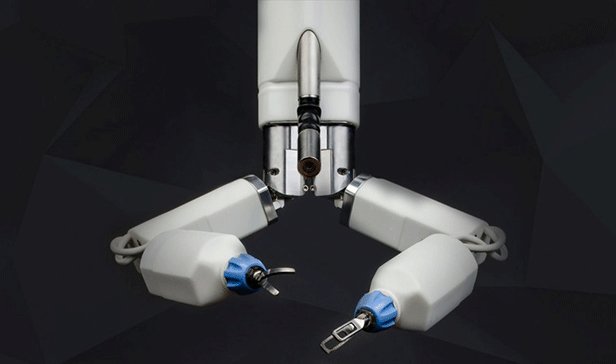 After performing its first laparoscopic procedure earlier this year with its miniaturized surgery robot, Virtual Incision has gathered $46 million in new funding to help complete clinical testing and begin the system’s commercial launch.

Weighing only two pounds, the company’s MIRA platform aims to shrink down the surgeon’s experience and virtually place them inside the abdomen, with an articulated HD camera and instruments attached to two robotic arms.

Its first surgery—a partial removal of a patient’s colon, completed at Bryan Medical Center in Lincoln, Nebraska this past August—was completed via a single incision through the navel. Connected to a surgeon’s operating console and a wheeled support cart, the portable MIRA system is designed to be moved throughout a hospital without dedicated operating room infrastructure.

The latest proceeds will help power efforts to expand the clinical trial to additional sites as well as further regulatory submissions to the FDA for approval. The series C round was co-led by Endeavour Vision and Baird Capital, with additional backing from the company’s largest shareholder, Bluestem Capital, among other firms.

Virtual Incision previously collected $18 million in a 2017 series B fundraising, and added another $20 million to its coffers in January 2020 through what it described as a series B+ round.

The company estimates that more than 60% of bowel resections performed today are done through open surgery, resulting in nearly 300,000 U.S. patients facing longer hospital stays and recovery times despite the availability of laparoscopic methods.

“While the demand for robotically assisted surgery continues to grow because of its clear benefits for patients, there are still challenges that hinder broader adoption, such as high cost, complex set-up and required space and infrastructure,” said Endeavour Vision Partner Robert Barmann.

“MIRA is intended to address the limitations associated with current main-frame robotic-assisted surgery systems through its small, mobile design that is streamlined for routine high volume procedures,” Barmann added.

Beyond colon removal procedures used to treat cancer and bowel conditions such as Crohn’s disease or severe diverticulitis, Virtual Incision is also developing new mini-robots for other gastrointestinal and gynecological procedures. They include hernia repairs, gallbladder removals, hysterectomies and bariatric surgeries, which together account for millions of cases annually.