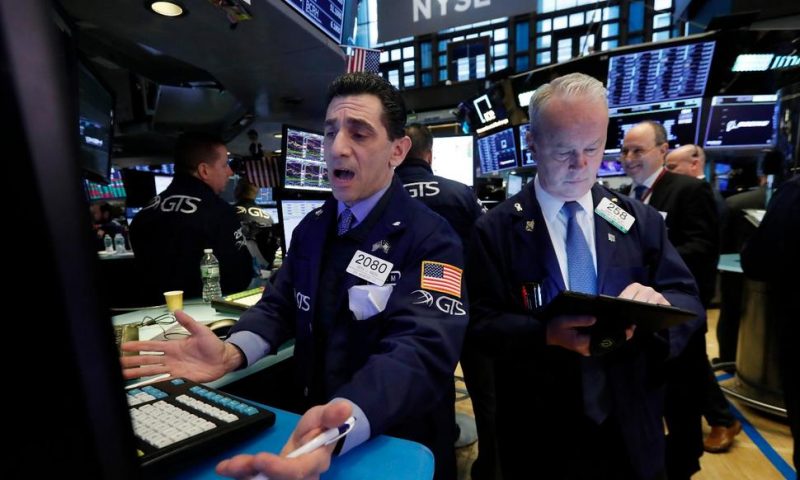 A modest rally faded in the last few minutes of trading on Wall Street, leaving stocks slightly lower Wednesday ahead of the latest round of trade talks between the U.S. and China.

A modest rally faded in the last few minutes of trading on Wall Street, leaving stocks slightly lower Wednesday ahead of the latest round of trade talks between the U.S. and China.

The late-afternoon reversal added to the market’s losses following a steep sell-off a day earlier as investors worry that the costly trade dispute between the world’s two biggest economies will escalate.

Financial markets turned volatile this week after President Donald Trump threatened to impose more tariffs on Chinese goods, a threat that is set to become reality early Friday. Negotiations between the U.S. and China are scheduled to continue in Washington on Thursday, and will include China’s top trade official.

Trump said on Twitter that China is coming “to make a deal” but that he’ll still be ready to raise tariffs if the negotiations fail to produce an agreement.

That appeared to give the market a boost, but it didn’t last.

“Investors are concerned that a deal may not be forthcoming,” said Quincy Krosby, chief market strategist at Prudential Financial. “You don’t want to be caught off-guard by perhaps a negative comment out of Beijing overnight or, for that matter, the White House.”

The U.S. and China have raised tariffs on tens of billions of dollars of each other’s goods in their dispute over U.S. complaints about China’s technology ambitions and practices.

Investors have been anticipating a deal throughout this year, which contributed to double-digit gains in all the major indexes. But the latest tough talk is raising anxiety on Wall Street and casting more doubt about a resolution.

The U.S. government has filed plans to raise tariffs on $200 billion worth of Chinese imports from 10% to 25% Friday. If it follows through on those plans, it would mark a sharp escalation in the yearlong trade dispute that has raised prices on goods for consumers and companies.

The Trump administration also has threatened to extend 25% tariffs to another $325 billion in Chinese imports, covering everything China ships to the United States.

The possibility that the trade dispute could escalate represents a marked shift from just a few weeks ago, when talks between the U.S. and China appeared to be on track for an agreement.

“There’s still is uncertainty out there on the three possible outcomes: We get a trade deal out of this in the short term, we get something out of it in the long term and the U.S. and China keep talking, or we get no trade deal,” said Jeff Zipper, managing director at U.S. Bank Private Wealth Management.

Investors also continued to pore over the latest batch of corporate earnings reports.

Lyft slumped 10.8% in heavy trading after reporting a first quarter loss late Tuesday that was far wider than Wall Street had forecast.

The ride-hailing company lost $1.1 billion in its first quarter as a public company, primarily because it paid out $894 million in stock-based compensation and related payroll taxes during its initial public offering.

Lyft’s stock has now slumped 26.5% since its market debut on March 29. The report came just days before the hotly anticipated IPO of Lyft’s much larger rival, Uber, on Friday.

Marathon Petroleum slid 7.1% after the oil refiner reported a surprise first quarter loss and announced the merger of two of its operations for $9 billion.

UK and Ireland Agree on Residency for Citizens Post-Brexit