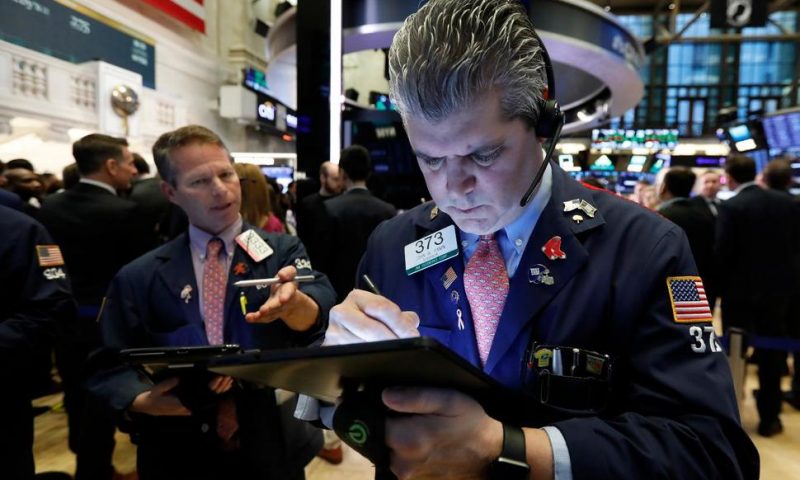 Wall Street capped a week of milestones by delivering a couple more Friday.

Wall Street capped a week of milestones by delivering a couple more Friday.

A late-afternoon burst of buying lifted the major U.S. stock indexes, which had spent much of the day in a sideways drift. The gains nudged the benchmark S&P 500 index and Nasdaq composite to new closing highs for the second time this week. Both indexes also set record highs on Tuesday.

The Dow Jones Industrial Average eked out a gain, but ended the week slightly lower.

Smaller company stocks fared better than the rest of the market, a bullish sign indicating that investors were more willing to take on risk.

While company earnings were mixed, investors drew encouragement from a government report estimating that the U.S. economy grew at a solid 3.2% annual rate in the first three months of the year — a much bigger increase than expected.

“The first quarter number is typically the weakest of the year, so the fact that this number was so strong is a positive sign going forward,” said Cliff Hodge, director of investments for Cornerstone Wealth.

The S&P 500’s latest all-time high underscores the market’s blockbuster turnaround this year after nosediving at the end of 2018 amid fears of a recession, an escalating trade war between the U.S. and China, and concern that the Federal Reserve was moving too aggressively to raise interest rates.

In the months since, those concerns have eased or taken a back seat to more optimism among investors about the prospects for steady economic growth. Improved economic data out of China and signals that Washington and Beijing are making progress toward resolving their costly trade dispute has also helped ease market jitters.

Perhaps most of all, traders have been encouraged by an increasingly hands-off Fed, which has signaled that it may not raise interest rates at all in 2019 after seven increases the previous two years.

More recently, companies that have reported first quarter results have mostly met profit forecasts, taking some pressure off the market.

U.S. companies are about a third of the way through their latest round of quarterly reports. So far they’ve avoided analysts’ most dire predictions for a severe contraction.

Meanwhile, investor fears of a potential recession have subsided since the year started, helping the market steadily recover from its fourth-quarter meltdown.

“With no recession, the market was due for a bounce back,” he said, noting that investors seem to be complacent with a less volatile market, which he said could be setting it up for a pullback.

Wall Street’s strong recover this year has helped fuel a surge in corporate deals. So far this year, there have been $711 billion in mergers and acquisitions in the U.S., the fastest start to a year on record, according to Dealogic.

The market has also been rewarding some technology companies since their highly anticipated stock market debuts. Pinterest and Zoom both went public earlier this month and are trading near their raised initial prices. Ride-hailing company Uber and messaging platform Slack are set to be the next technology companies to open up for public investment.

All told, 34 IPOs have been completed this year, raising $9.5 billion, down from 55 IPOs that raised $18.5 billion in the same period last year, said Kathleen Smith, principal at Renaissance Capital, a provider of pre-IPO research and IPO exchange-traded funds.

Smith noted that the upcoming $8.5 billion Uber IPO and a pipeline of over 200 others, could make 2019 a record year for capital raised in the IPO market.

On Friday, gains in financial, health care and other sectors offset losses in technology stocks. Energy companies also fell as the price of U.S. crude oil slumped for the third straight day.

Ford Motor rode its trucks and SUVs to a solid first-quarter profit. The stock vaulted 10.7%.

Amazon gained 2.5% a day after the e-commerce giant said its profit more than doubled in the first quarter.

Intel shares tumbled 9% after the chipmaker warned that weak demand in China will likely continue through the current quarter. It slashed its forecast for the quarter and expects a drop in revenue for the year.

Exxon Mobil slid 2.1% after the oil company’s first quarter profit fell by half, missing forecasts due to more spending on oil production and lower margins in its refinery business.

Exxon was part of a broad slide in energy sector stocks Friday, as the price of benchmark U.S. crude oil fell 2.9% to settle at $63.30 a barrel.

Oil prices increased during the first quarter following an agreement by OPEC and allies including Russia to limit production. More recently, prices have risen after the U.S. government announced it will end waivers from sanctions for countries that import oil from Iran, including China, India, Japan and South Korea.

Outlook for the US Economy and Stock Market Brightens