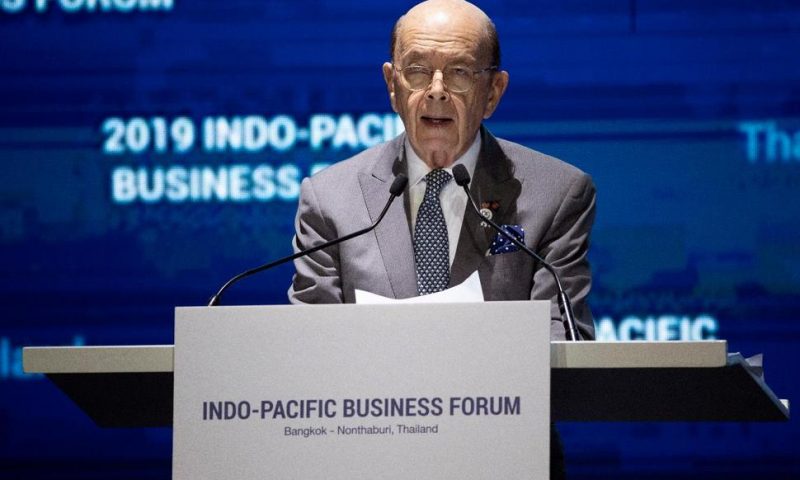 US markets business engagement with Asia as trade war with Beijing drags on.

NONTHABURI, Thailand — The U.S. is deeply committed to doing business with Southeast Asia, Commerce Secretary Wilbur Ross said Monday at a conference on the sidelines of a regional summit that President Donald Trump chose not to attend.

Ross and other American officials showcased American involvement in trade and investment in the region and launched a new initiative for infrastructure financing at the Indo-Pacific Business Forum, a gathering of about 1,000 business and government representatives in the outskirts of the Thai capital.

Ross and Trump’s national security adviser, Robert O’Brien, were the senior U.S. officials attending the meetings at the summit of the 10-nation Association of Southeast Asian Nations. Most other regional leaders, including Chinese Premier Li Keqiang, attended.

Nonetheless, Ross said the Trump administration is “extremely engaged and fully committed to this region.”

Trump issued an invitation, via O’Brien, for the ASEAN leaders to attend a meeting early next year in the United States. Details of that proposal and the other leaders’ reactions to it were unclear.

“Look. Showing up is important,” said Charles Freeman, senior vice president for Asia for the U.S. Chamber of Commerce. But he added, “it’s more about substance than symbolism.”

“We really need a whole of government approach from the United States,” he said.

On Sunday, host Thailand announced a rough agreement on plans for reaching a deal on a 16-nation trade pact, dubbed the Regional Comprehensive Economic Partnership, that does not include the U.S. but does include Japan, China and, maybe, India.

Confirming what other officials would say only privately, Chinese Vice Premier Le Yucheng told reporters that the other 15 RCEP countries already had agreed on market opening and other commitments.

“Whenever India’s ready, it’s welcome to get on board,” Le said. “It is no problem for the (other) 15 countries to sign the agreement next year.”

Trump has said he favors country-to-country free trade arrangements rather than multilateral deals. More than a year ago, he began hiking tariffs on imports from China in an effort to get Beijing to negotiate an agreement with Washington on changing its industrial planning strategy to end policies and practices that U.S. officials say are unfair and contribute to the huge U.S. trade deficit with China.

Since then tensions have escalated, with both sides imposing punitive tariffs on billions of dollars’ worth of each other’s exports.

Describing that dispute with Beijing as the “elephant in the room,” Freeman said the two sides need to reach not just a “thaw, but a comprehensive agreement.”

Ross has joined U.S. Trade Representative Robert Lighthizer in negotiating with Beijing on the dispute. Trump and Chinese President Xi Jinping agreed last month to put further tariff increases on hold after saying the two sides had a basic agreement. But so far, no deal has materialized and the cancellation of a Pacific Rim summit that had been planned for later this month in Chile means Xi and Trump have no immediate plans to meet.

“We are very far along with Phase 1,” Ross said of the trade talks.

Le, the Chinese vice foreign minister, also was upbeat, saying the two sides had agreed to continue talks with a “sincere and constructive attitude.”

Trump’s decision to pull out of a rival arrangement, the Trans-Pacific Partnership, did not sway the other 11 nations in that trade pact. They pushed ahead with the plan minus the U.S.

If realized with all 16 members, the RCEP trade bloc would be one of the world’s biggest, encompassing a market of 3.6 billion people and accounting for roughly a third of world trade and of world business activity.

Organizers pointed to 3.4 million U.S. jobs related to exports to Asia and $1.8 trillion in trade with the Indo-Pacific region.

The friction between the U.S. and China has made a dent in two-way trade, which has fallen by about 15% this year as average tariffs rose to about 20% in September from 3%-8% in early 2018. Some of that trade has been displaced to other Asian markets, with exports from Thailand and Vietnam rising sharply.

Trump’s America First policies reflect in part a backlash against globalization and the shift of U.S. manufacturing to overseas markets in China and beyond.

But more than two-thirds of world trade involves supply chains based in more than one country.

And it was that same transformation of industry that enabled China and its neighbors to grow their economies, Malaysian Prime Minister Mahathir Mohamad said at an ASEAN-led business conference on the sidelines of the summit.

After preaching to the world about the benefits of free markets “now they want to close down their borders,” he said. “In fact, some are already building walls.”