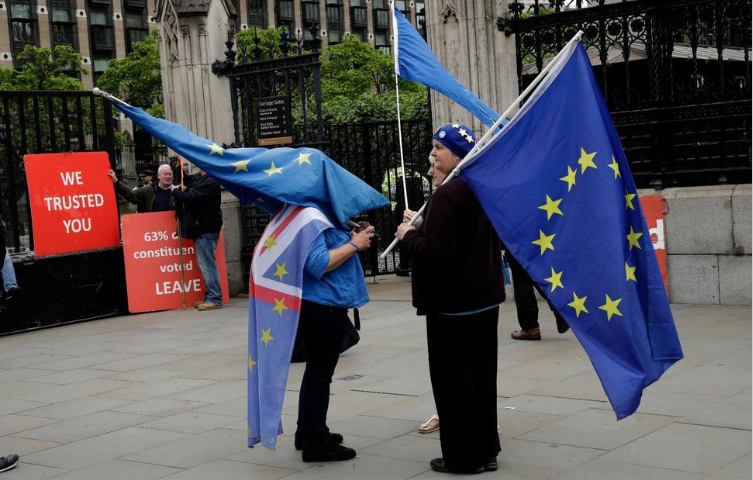 Britain’s Treasury chief is urging Conservative Party leadership contenders to be honest with the public and spell out what they would do if their plans for departure from the European Union falter.

LONDON — Britain’s Treasury chief urged those seeking to be Britain’s next leader to be honest with the public and spell out what they would do if their plans for leaving the European Union falter.

Philip Hammond used a speech in London on Thursday to say the candidates should outline what their Plan B might be if Parliament rejects both the Brexit deal negotiated by outgoing Prime Minister Theresa May and leaving the bloc with no deal at all.

Hammond’s speech to the annual Mansion House dinner in London’s financial district was interrupted by climate-change protesters in red evening dresses with sashes that read “climate emergency.” Greenpeace said the protesters were members of the group who had “gatecrashed” the dinner.

Hammond resumed his speech after a few minutes.

“The irony of course is that this is the government that has just led the world by committing to a zero-carbon economy by 2050,” he said.

Hammond, who has long warned of the dangers posed by a badly managed Brexit, urged the two remaining leadership candidates to offer realistic strategies for taking the British economy out of the “holding pattern” that it has been stuck in as May sought to get her Brexit divorce deal through the House of Commons — possibly even if it means another referendum on leaving the EU.

“We cannot allow ourselves to be forced to choose between our democracy and our prosperity,” Hammond said. “And if the new prime minister cannot end the deadlock in Parliament, then he will have to explore other democratic mechanisms to break the impasse.”

Hammond repeated warnings that leaving the EU without a deal would damage the British economy and ultimately risk the breakup of the U.K. a veiled reference to increasing tensions in Scotland and Northern Ireland, both of which voted to stay inside of the EU. He also stressed that the 26.6 billion pounds ($34 billion) of “fiscal headroom” set aside by the Treasury would be soaked up quickly by a no-deal Brexit.

The comments are seen as a rebuke to Boris Johnson, the front-runner in the race to be the next leader of the Conservative Party and the next British prime minister. Johnson is arguing that some of the contingency fund set up to cushion the British economy in the event of “no deal” could be used for tax cuts.

“There is a choice: either we leave with no deal or we preserve our future fiscal space — we cannot do both,” Hammond said.

Hammond also said it was unlikely the EU would do a “180-degree U-turn” and re-open talks on the Brexit withdrawal agreement.

Irish Prime Minister Leo Varadkar bolstered that view Thursday. Speaking after talks with EU Brexit negotiator Michel Barnier, Varadkar said that an extension might be granted for Britain to hold a new election or a second referendum on leaving the EU, but Europe was losing patience over Britain’s prolonged political stalemate over Brexit .

Varadkar ruled out prolonging Britain’s EU departure — now slated for Oct. 31 — for more divorce negotiations, saying the “time for that has long since passed.”

Varadkar insisted that “the withdrawal agreement is not going to be reopened.”

Slack sets reference price at $26 a share for public debut