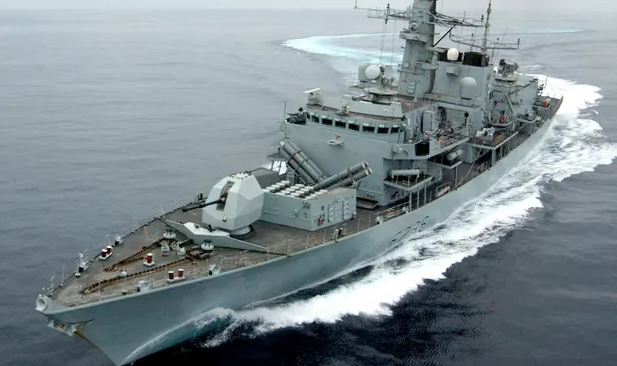 British ships operating in the Gulf have been put on the highest state of alert amid fears that UK-flagged commercial vessels are vulnerable to attack by Iranian gunboats.

The change in guidance from the British government, changing the alert to level 3, was made on Tuesday, a day before a Royal Navy warship trained its guns on Iranian gunboats that tried to disrupt the passage of an Isle of Man-flagged vessel. Level 3 is described as equivalent to the domestic security classification of critical in which there is an imminent risk of an incident.

The alert is for the 15-30 large British-owned vessels that travel through the Gulf every day.

The UK said the commercial ship, British Heritage, was in disputed waters claimed by Iran when it was challenged by three Iranian vessels and ordered to move north. HMS Montrose then intervened, aiming its guns at the Iranian boats to ward them off.

The UK, keen to de-escalate the crisis and preserve the international nuclear deal with Tehran, is reluctant to release the video of the incident, which was first reported by the US late on Wednesday night.

“It seems that the Brits and the French and the Germans are coming around to the idea that the Iranians are up to no good!” President Trump tweeted on Thursday.

Britain has one warship, HMS Montrose, and three minesweepers operating in the area and so lacks the capacity to escort all British-linked ships moving through the Strait of Hormuz. Defence officials said that the British deployment is kept under constant review, but it was not possible to escort every ship travelling in Gulf waters.

British officials promised the Royal Navy “will be resolutely defending British maritime interests in the Gulf, but has no interest in escalating the situation”.

The threat to British shipping in the Gulf follows the seizure by Royal Marine commandos of an Iranian-flagged vessel, Grace 1, off the Straits of Gibraltar last Thursday, that prompted Tehran to threaten reprisals. The tanker is suspected of breaching European Union sanctions by carrying a shipment of Iranian crude oil to Syria.

The Indian captain of the ship and its chief officer were formally arrested on Thursday by Gibraltarian authorities after a week-long investigation. The ship remains detained and Iran has denounced the actions as piracy. Documents and electronic equipment was seized from the vessel, a spokesperson said.

British Heritage had been due to collect oil in Basra, Iraq, but abruptly turned around on Saturday on the basis of British government advice. It was seeking to go through the crowded waters without a load when it faced an Iranian instruction to go clearly into Iranian waters.

The waters in which British Heritage was accosted are claimed by Iran and by the United Arab Emirates. It is not possible for British shipping to go through the Straits without entering Iranian waters.

Speaking about the latest confrontation, the Ministry of Defence said in a statement: “Contrary to international law, three Iranian vessels attempted to impede the passage of a commercial vessel, British Heritage, through the strait of Hormuz.”

HMS Montrose was “forced to position herself between the Iranian vessels and British Heritage and issue verbal warnings to the Iranian vessels, which then turned away,” the statement said. “We are concerned by this action and continue to urge the Iranian authorities to de-escalate the situation in the region.”

Iran has rejected the claims. Foreign minister Javad Zarif called the British allegations “worthless” in remarks to the semi-official Fars news agency. “Apparently the British tanker has passed. What [the British] have said themselves and the claims that have been made are for creating tension and these claims have no value,” Zarif said.

The UK is waiting to hear detailed proposals from the US about a new international maritime security operation across the Gulf but ministers appear to be nervous about the implications of the plans, pointing to the existing 33-nation coalition on shipping.

The US proposal is likely to include a requirement for Asian countries to do more financially to subside the security operation, with Washington pointing out that a huge proportion of oil travelling through the Gulf is destined for Asian markets.

Jeremy Hunt, the foreign secretary, appeared to recognise the difficulty the UK faced in protecting its maritime shipping due to successive defence budget cuts. He tweeted: “Latest incident with Iranian boats in the Gulf shows exactly why we must invest more in defence. We have run down our Navy too much and this must now be urgently reversed. We need to show confidence in the world by putting our money where our mouth is!”

Tehran has been accused of sabotaging oil tankers in the Strait of Hormuz in an attempt at economic retaliation against the US after Donald Trump pulled out of a 2015 nuclear agreement and imposed crippling sanctions on Iran.

Washington and Tehran came close to direct military conflict last month, when Iran shot down a US drone and Trump ordered retaliatory airstrikes, only to call them off minutes beforehand.

The UK and other European countries have been trying to save the deal, in which Tehran agreed to limits on its nuclear programme in exchange for relief from international sanctions.

Russia and China, both signatories to the nuclear agreement along with the UK, France and Germany, called for restraint. Kremlin spokesperson Dmitry Peskov said “freedom of navigation should be ensured in the Persian Gulf and the Strait of Hormuz”.