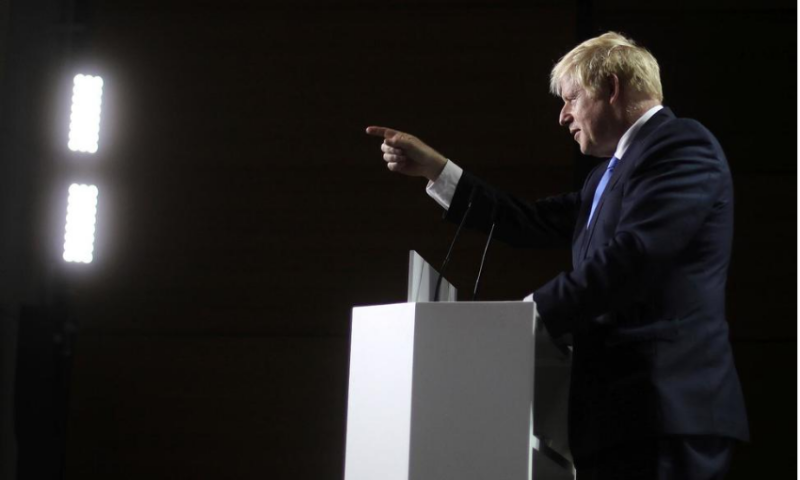 Opposition lawmakers have declared they will work together to try to stop a departure from the European Union without an agreement, setting up a legislative challenge to Prime Minister Boris Johnson who has promised Brexit on Oct. 31_ come what may.

LONDON — Opposition lawmakers declared Tuesday they will work together to try to stop a departure from the European Union without an agreement, setting up a legislative challenge to Prime Minister Boris Johnson and his promise to complete the divorce by Oct. 31— come what may.

Some 160 lawmakers have signed a declaration pledging “to do whatever is necessary,” to prevent Johnson from bypassing Parliament in his plans. Johnson’s do-or-die promise has raised worries about a disorderly divorce that would see new tariffs on trade and border checks between Britain and the EU, seriously disrupting business.

“The Prime Minister needs to respect Parliament and understand the role of Parliament is to question and challenge the executive,” the main opposition Labour Party leader Jeremy Corbyn said.

Johnson has refused to rule out suspending Parliament, saying it was up to lawmakers to carry out the decision of the 2016 referendum to leave the EU and that the public is “yearning for a moment when Brexit comes off the front pages.”

But the opposition is objecting to the direction of travel. The Labour Party, the Scottish National Party, Liberal Democrats, Plaid Cymru, the Green Party and the Independent Group for Change said Johnson has shown himself “open to using anti-democratic means to force through no-deal.”

During a meeting Tuesday at the site where Parliament met during World War II, the lawmakers signed what they called the Church House Declaration, demanding to be heard.

“Shutting down Parliament would be an undemocratic outrage at such a crucial moment for our country, and a historic constitutional crisis,” the declaration said. “Any attempt to prevent Parliament sitting, to force through a no-deal Brexit, will be met by strong and widespread democratic resistance.”

Johnson has told European Union officials it won’t be possible to stop Britain’s departure from the trading bloc without the removal of controversial language about a “backstop” to avoid the return of a border between EU member Ireland and Britain’s Northern Ireland. He said at the close of the G-7 summit in Biarritz, France, Monday that he was “marginally more optimistic,” of progress.

“But, remember that all statistical estimates that I give about the chances of a deal —whether they are expressed in odds of millions to one, or getting closer, or hotter or colder, or whatever — they all depend exclusively on the willingness of our friends and partners to compromise on that crucial point and to get rid of the backstop and the current withdrawal agreement,” he said.

Johnson last week tried to persuade the leaders of Germany and France to support his vision. They have responded by challenging Johnson to show he can come up with a better alternative, putting the onus on him to come up with the ideas.

Johnson was set to speak by phone Tuesday with European Commission President Jean-Claude Juncker, who will use his first day back at work after a gallbladder operation to discuss stalled Brexit negotiations.

Juncker’s spokeswoman Mina Andreeva said that any proposal by Johnson would need to be “compatible with the withdrawal agreement” that the EU negotiated with his predecessor Theresa May. Johnson is insisting that the Irish border arrangement in the agreement must be removed.

On Wednesday, Johnson’s Europe adviser David Frost will be in Brussels for talks expected to carry on all week.

Meanwhile, the Archbishop of Canterbury says he’s be willing in principle to chair a citizens’ forum on Brexit, but that conditions for him accepting such a role have not been met. The comment came after a group of lawmakers asked him to chair a process that would involve “a bit less shouting and a bit more listening.”

Brexit supporters suggest such a forum would be aimed at averting a no-deal Brexit.

A Decade After a Split, the Marlboro Men Seek a Reunion

US Home Prices Rise a Modest 2.1% in June