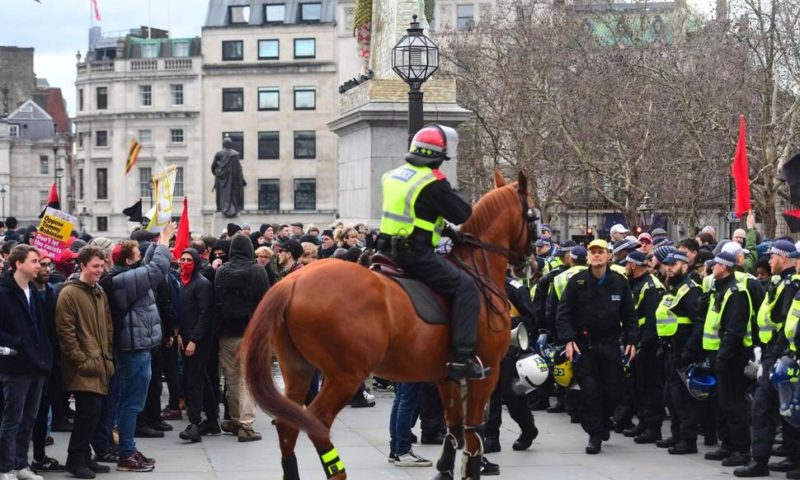 Britain’s Parliament resumes debate on Monday, a day before a crucial vote on whether to accept or reject a Brexit deal.

LONDON — With a crucial parliamentary vote on Brexit looming, British Prime Minister Theresa May warned lawmakers Sunday that they could take Britain into “uncharted waters” and trigger a general election if they reject the divorce deal she struck with the European Union.

May is fighting to save her unpopular Brexit plan and her job ahead of a showdown in Parliament on Tuesday, when lawmakers are widely expected to vote down the deal she negotiated with Brussels. Her Downing Street office insisted that the vote will go ahead despite speculation that the government may be forced to delay it.

A defeat in the vote could see Britain crashing out of the EU on March 29, the date for Britain’s exit, with no deal in place — an outcome that could spell economic chaos.

In an interview with the Mail on Sunday, May said nixing her deal would “mean grave uncertainty for the nation with a very real risk of no Brexit or leaving the European Union with no deal.”

“When I say if this deal does not pass we would truly be in uncharted waters, I hope people understand this is what I genuinely believe and fear could happen,” she said.

May’s government does not have a majority in the House of Commons, and opposition parties — as well as many of May’s own Conservatives — have already said they will not back the divorce deal that May and EU leaders agreed on last month.

Pro-Brexit lawmakers say the deal keeps Britain bound too closely to the EU, while pro-EU politicians say it erects barriers between the U.K. and its biggest trading partner and leaves many details of the future relationship undecided.

The main sticking point is a “backstop” provision in the Brexit agreement that aims to guarantee an open border between EU member Ireland and the U.K.’s Northern Ireland post-Brexit.

The temporary measure would keep Britain under EU customs rules, and is supposed to last until superseded by permanent new trade arrangements. But critics say it could leave Britain tied to the EU indefinitely, unable to strike new trade deals around the world.

Boris Johnson, May’s former foreign secretary and leading Brexiteer, said the backstop puts Britain in a “diabolical negotiating position,” and insisted Sunday that it must be taken out of the divorce deal. He urged May to renegotiate with the EU, and postpone the Irish border issue so it forms part of the talks on a future trade deal.

“We have to change it,” Johnson told the BBC. “We can have a withdrawal agreement that does not contain the backstop. We can do much, much better than this.”

It’s unclear what would happen next if lawmakers vote down the deal.

May could return to Brussels seeking changes to the Brexit deal and bring it back to Parliament for another vote. But EU leaders have insisted the divorce agreement is final and not renegotiable.

However, while the 585-page withdrawal deal is set, the declaration on future relations between the EU and Britain is shorter and vaguer and may be open to amendment.

Meanwhile, pro-Brexit Conservative rebels who have long wanted to oust May can trigger a no-confidence vote if they amass enough support.

The Labour Party may also attempt to force a general election or seek to form a minority government.

“What we would urge (May) to do is either call a general election — because she wouldn’t have the confidence of Parliament to carry on as prime minister,” Rebecca Long-Bailey, Labour’s business spokeswoman, told the BBC. “But alternatively, she could offer to renegotiate around a deal that would provide consensus in Parliament.”

Some have also floated the idea of a second referendum on the question of Britain’s EU membership but the government is firmly opposed to that.

Voters who favor pulling out of the EU narrowly won a 2016 referendum that triggered the exit process, but the subject still deeply divides the nation. On Sunday, riot police were deployed on central London streets amid fears of clashes between a pro-Brexit rally led by far-right activist Tommy Robinson and counter-protesters.

Thousands of supporters of the Eurosceptic U.K. Independence Party and Robinson, whose real name is Stephen Yaxley-Lennon, rallied to accuse May of compromising over Brexit. They were met with thousands of Labour activists and anti-fascist protesters.